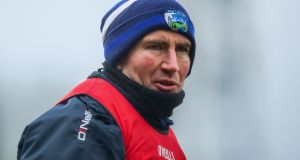 Eddie Brennan brings his Laois side back to his former stomping ground to take on Kilkenny on Sunday. Photograph: Tommy Dickson/Inpho

ALLIANZ HURLING LEAGUE
DIVISION 1A
Galway v Cork
(Pearse Stadium, 2.0 – Deferred TG4)
Shane O’Neill has taken a big-picture attitude to his first league with Galway, emphasising the importance of a “competitive squad”. And he has mixed up his team selections through the weeks, but a win would be timely. Joe Canning was a late withdrawal with injury in last week’s late defeat against Waterford. Pat Horgan hit a phenomenal 0-17 from placed balls last time out for Cork: placing the onus on Cork to score from play on a stormy day in Salthill will be central to the home team. Defeat here would eliminate Galway from the knock-out stages. Verdict: Galway

Limerick v Westmeath
(Gaelic Grounds, 2.0)
Limerick are rampant – within the context of the league. John Kiely’s team had 10 different scorers contributing to the 0-29 they posted against Cork. With long-term injuries to Peter Casey and Adrian Breen clearing up, they are getting stronger. A tough assignment, then, for Westmeath who are without a win. The 3-27 they shipped in losing to Tipperary was tough but exposure to high-calibre opposition is invaluable to the county. Verdict: Limerick

Tipperary v Waterford
(Semple Stadium 2.0 – Live TG4)
Liam Cahill returns to his old haunt on the back of an encouraging league with Waterford. Liam Sheedy has made no secret of the fact that Tipp are going through a heavy duty training regime just now. The league will look after itself. It’s a first league meeting between the counties for two years: there was a gulf when they met last summer. The return of Noel McGrath deepens Tipp’s squad and this game presents a good opportunity for the All-Ireland champions to remind the rest of what they are about. Verdict: Tipperary

DIVISION 1B
Clare v Dublin
(Cusack Park, Ennis, 2.0)
Clare are already through to the knock-out stages: a win here will deliver Brian Lohan’s side straight through to the semi-finals. Their unbeaten status has been underwritten by an obdurate quality and encouraging performances from younger players like Liam Corry and Aidan McCarthy. Dublin felt the sting of Wexford’s late surge a week ago but will take the substance of a good performance into this occasion, although Mattie Kenny has declared his intention to rotate his team for this game. Verdict: Clare

Kilkenny v Laois
(Nowlan Park, 2.0)
Eddie Brennan’s influence on Laois has been tremendous and there’ll be a lot to savour in this homecoming. That said, he would have preferred to have had this game in its scheduled venue in O’Moore Park: Laois had to forfeit home advantage because of the surface of the pitch. It has been a tough week for Kilkenny with news that Adrian Mullen, the young hurler of the year, will miss the remainder of the season with a cruciate injury he sustained against Clare. Pádraig Walsh may be back for Kilkenny but the Ballyhale Shamrocks players will not be making an appearance. Still, a convincing home win is the likely outcome. Verdict: Kilkenny

Wexford v Carlow
(Wexford Park, 2.0)
The Davy Fitz carnival has provided much of the colour of this pedestrian hurling spring, with the homecoming in Clare, the madcap win in Nowlan Park and last week’s late, late win in Croke Park. This fixture looks set to be more straightforward. Carlow are consigned to a relegation playoff. Verdict: Wexford

Entire Newcastle squad to self-isolate amid Covid-19 outbreak 07:35
Comfortable wins for Munster and Ulster; Full panels can now attend GAA matches 07:24
Gerry Thornley: Maybe the new Ireland could do with a little of the old detail 06:00
Kevin McStay: Beautiful chaos of All-Ireland to end in a Dublin-Mayo final 07:57
David Nucifora confident IRFU will keep majority of players they want 05:30
Crossword Get access to over 6,000 interactive crosswords