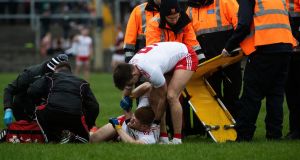 It went from bad to worse for Tyrone last week when Cathal McShane went off with a bad injury. Photo: Evan Logan/Inpho

Supporters were thin on the ground when Mattie Donnelly appeared at the dressing room door in Tuam stadium last Sunday. The Galway crowd disappeared quickly into the county constituencies, east and west thrilled giddy by what they had seen. Tyrone people pointed the bonnets north in more reflective mood, wondering where they are at right now.

The Trillick man looked fit and lean as he tried to answer that very question but he is emblematic of a spring league that has deepened into a season of tribulations for Tyrone. Donnelly is one the most versatile and important players in Tyrone’s attacking system. He won’t be back in the Red Hand shirt until summertime earliest, having endured a detached tendon during a club championship game last November. It’s the kind of injury that can finish a football career unless managed with expertise and patience. So Donnelly isn’t rushing anything but frustration was etched on his face as he considered the wreckage of the afternoon against Galway. Two men sent off. Cathal McShane, the totemic full-forward, stretchered off and unlikely to return for the rest of the league. A 19-point defeat – the biggest defeat of the Mickey Harte era. And now Dublin coming up the road for a Saturday night league game which will contain all the usual needle and significance between these contemporary rivals.

“There will be no flogging at this stage with the games coming thick and fast,” he promised.

“It will be more showing the mental frame and obviously when Dublin is coming to town that takes care of itself, too. You can’t be feeling sorry for yourself for too long. The boys will be hurting a lot but that will hopefully lead to a reaction for Dublin next Saturday.”

But there was no mistaking that Tyrone’s sense of urgency has sharpened. It’s impossible to overstate the importance of both McShane and Donnelly to Tyrone’s grand plans. Since Sean Cavanagh bowed out after 16 seasons, Tyrone as a county have specialised in the same type of attacking football players – neat, fast, skilful, comfortable ball carriers who excel on the counter attack but lack conspicuous range from distance. When McShane was stretchered off in the 38th minute, Galway were temporarily troubled by the speed and movement of Darren McCurry and McShane’s replacement Mark Bradley up front. And it will quickly be forgotten, in the haze of that 19 point gap, that they worked their way back to a three points game; enough to convince Pádraig Joyce that it was time to introduce Paul Conroy and some order to proceedings. The plan was surely to see the game out. Instead, Tyrone disintegrated as Galway ran riot.

McShane’s early February decision to remain in Ireland rather than go and play Australia Rules literally changed the mood within the GAA strongholds of Tyrone. Short of Peter Canavan somehow erasing 15 years and lacing them up again, it’s hard to imagine the return of any one player having that impact. But if Tyrone are to prosper this summer, they are going to need a healthy McShane.

But what does ‘prosper’ even mean for Tyrone? The underlying theme of any Tyrone season inevitably concerns the longevity of the Harte era. The invention and enthusiasm fuelling Galway’s win on Sunday was evidence of the dramatic impact that a new manager can have. Then, Tyrone don’t need such wins right now. Tyrone, under Harte, have never been gunning to win league titles. They’ve only ever won the competition twice, most recently in 2003, during Harte’s first season. They haven’t appeared in a final since 2013 and that felt like they just happened to end up there rather than through any design. What they have specialised in is lurking around the middle of Division One. They’ve been relegated just twice during Hart’s time, in 2010 and 2015.

But if you look at the company they kept in that 2016 league season when they promptly climbed out of Division Two again – Galway, Cavan, Fermanagh, Meath, Derry, Armagh, Laois – it was clear that Tyrone belonged in a different realm. Over the next three years, they would win two Ulster championships (2016 and 2017) and, in 2018, return to their fourth All-Ireland final of the Harte era. They suffered their first All-Ireland final loss that year too, the 2-17 to 1-14 defeat against the Dublin five-in-a-row team that arguably reached its zenith that year. Last year, they were All-Ireland semi-finalists, losing a taut game to Kerry. They are always there or thereabouts.

The immediate challenge for Tyrone is to get their house in order to face Dublin tonight. It is one thing to suffer a black afternoon in Sean Purcell country but quite another to get torn apart on live television by the All-Ireland champions with half of Tyrone watching. Will the team be ready for that?

“We will only know that next Saturday night,” Harte said after the Galway defeat.

“We don’t have the answer to that right now. We can only do what we believe to be the best thing during the week. I have talked to them already and said there are two ways we can look at this. We can say: we are horrible team and we were battered off the field today. Or you can say we are a decent team and beat Kerry last time out. So we are not possibly either of those things now. We are a work in progress. But we got to believe we are better than the score line suggests today. I am not going to be influenced by the nature of the score line. I just want to believe it is one of those days that thanks be to God hasn’t happened to me in sport. It did today. Which means that is something else I have to use as experience in the future.”

The bigger picture for Tyrone this year is to find their way to the Super 8s in the hope that McShane will come through his forecasted five-month lay-off, charged and ready to play. Their overall All-Ireland odds have shifted after the deluge of scores rained down on Tyrone. The rampaging Galway are now fourth favorites for the All-Ireland. Tyrone and Mayo, perceived as the most stubborn threats to Dublin during the five-in-a-row threat have been pushed out to 20/1. Right now, both counties are out of fashion.

When they went to play Monaghan a fortnight ago, Tyrone named an attacking six of Kieran McGeary, Niall Sludden, Darren McCurry, Mark Bradley, Kyle Coney and Ronan O’Neill. On paper, it looked appealing. O’Neill has been in and out of Tyrone teams for the past eight years without ever fully nailing down a role suited to his hugely skilful and exciting game style. Last March, he stepped away from the panel, frustrated by a lack of playing opportunities. The departure wasn’t acrimonious: he took some pointers from Harte and worked on them before returning to the squad ahead of this season. Against Monaghan, that attacking unit never fully fired: the team managed 0-11, O’Neill was substituted by half time and Colm Cavanagh was dispatched to full forward as Tyrone tried to gain a bit of purchase.

But then, Tyrone wouldn’t be the first football team to lose its coordinates in Castleblaney on a marshy February Sunday. Coney and O’Neill didn’t start the following game, the 0-14 to 0-13 win over Kerry. Instead, the more defensively oriented Frank Burns and Conor Meyler were named in the forwards line. Against Galway, Coney and O’Neill were listed in the substitutes again. They were keeping some highly prized company – Pádraig Hampsey, Conal Grimes and Bradley were also on the bench. The way things fell apart on the field was unfortunate. But the McShane injury has cast a shadow over Tyrone’s league now.

“It is extremely bad luck for Cathal and the team,” Donnelly said.

“It is heartbreaking for us boys because since he came back he has given us a serious boost and is such a positive source of energy for us and a massive player for us.”

So Tyrone are in a tight spot and need to come out fighting. One quarter from which they can expect little mercy is Dublin.