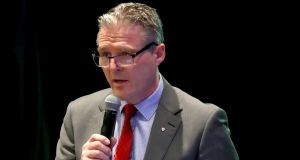 Jarlath Burns: despite some rumoured leakage, Burns is likely to get the lion’s share of the Ulster vote in his bid to become GAA president. Photograph: James Crombie/Inpho

The last word in GAA election etiquette went to Clare’s Noel Walsh who, after running third in the 1999 presidential election, prompted some much-needed merriment late on the Saturday afternoon of Congress when addressing delegates.

The latter category can be quite influential in these elections and they will be much on the mind of this year’s front runners, Jarlath Burns and Larry McCarthy – both of whom have their backers, as the race goes into its final day.

With the GAA Annual Congress starting on Friday evening in Croke Park, the vote is scheduled to take place just before eight o’clock. Results are expected by 10pm.

Burns from Armagh remains justifiably the favourite – but there are experienced observers who disagree. He has been impressive on the stump, visiting various counties but McCarthy, who will relocate from New York to Ireland if successful, has also made an impression, travelling widely and proving popular with his ‘light touch’ electioneering.

This has been an unusual election because all of the GAA territories are represented – each of the four provinces as well as the overseas units. This means that aren’t extensive drilling rights outside of the candidates’ own spheres, specifically for number ones votes.

The winner will be decided by the PR single transferable vote system as opposed to the old format of taking separate ballots after each exclusion. Despite the greater time efficiencies of this method, the result could still take a while.

The last two presidents, incumbent John Horan and Aodhán Ó Fearghail won easily on the first count whereas their predecessor Liam O’Neill was returned unopposed. Overall there hasn’t been a winner who needed more than one count in 27 years.

The relative voting strengths of the provinces at the last election are: Leinster 71, Ulster 49, Munster 47, Connacht 30 and overseas 73, made up of Britain 31, North America 20, Australasia 14 and Europe 8.

A major plank of the argument for McCarthy, who is a professor in Seton Hall University in New Jersey, is that should the overseas’ vote choose to seize the moment they won’t have a better chance to get one of their own elected.

Against that, it is a very fractured constituency and most candidates tend to know some people from the GAA diaspora quite well – making it hard to maintain a three-line whip on all or even a hefty proportion of the global delegates.

Even within the provinces, it is unusual for a candidate to command 100 per cent support but, despite rumoured leakage, Burns is likely to get the lion’s share of the Ulster vote.

It should accordingly come down to later preferences unless we see a significant shift in momentum in the lead-up to polling as happened the last time three years ago when, despite expectations of a close contest, John Horan stormed home on the first count.

The other three candidates in what is a big field are Cork’s Jerry O’Sullivan, Jim Bolger from Carlow and Roscommon’s Mick Rock.

As the Connacht representative, Rock has the disadvantage of the smallest base and although he may pick up a couple of other delegations it is unlikely to be enough to stay involved.

Bolger is expected to struggle to hold onto Leinster in the face of raids from across the border. Were he successful, it be the first time in more than 40 years that the president and director general come from the same county.

O’Sullivan has been low-key in his campaign and his voting strength is unlikely to extend far beyond Munster.

In terms of transfers, McCarthy is believed to be strong in Connacht – his GAA club in New York for instance is Sligo – and being originally from Bishopstown, he will be hopeful of getting Cork transfers from O’Sullivan. Burns though is said to be picking up counties, who are on the verge of going straight to the ultimate choice rather than backing local ‘favourite son’ candidates.

Ultimately this may be the last election under the current rules, as recommendations from the International Workgroup, rebalancing the delegate count in favour of home units, will be debated and determined at Saturday’s session of Congress.

A readjustment already took place in recent years when the number of eligible clubs – which is the basis for congress representation – was rationalised with the result that most delegations became smaller.