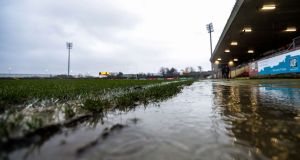 The GAA is due to review its fixture scheduling in the light of weather difficulties in the past two years but will not make changes to the calendar in order to preserve the status of April as a month as free as possible from intercounty activity.

Association president John Horan said at the weekend’s congress that the matter would be looked at by the Central Competitions Control Committee but referenced the gap weekends – spaces in the schedules – rather than the overall scheduling.

“The CCCC will definitely [review it]; they have two years of evidence now and if you go back to the fixture review committee, they left a gap in there and that was probably the one area of dispute between themselves and the CPA [Club Players Association, which advocated reducing the number of weeks taken up by the league].

“Look, we have had two weeks of weather now and our pitches are in great condition but look at Portlaoise – it just can’t take it.”

The Laois venue, MW Hire O’Moore Park had been badly hit by the successive storm weekends and the county hurlers switched their match against Kilkenny to UPMC Nowlan Park last weekend although the footballers’ fixture against Kildare went ahead.

Weather patterns over the past two years of a condensed calendar have obliged the GAA to push back the hurling league final each time because of delays to the fixture schedule. The 2019 Division 1 final was played on a double bill in Croke Park with its football equivalent whereas the 2018 decider ran into the second Sunday in April.

Although the football league finals haven’t been as affected the Allianz Football League has not emerged unscathed either. Last year, the Division Three final between Laois and Westmeath had to be played a week later than scheduled, on April 6th and in 2018, three fixtures in Division Four – none of which was material to the divisional final between Laois and Carlow – were simply abandoned.

This year, the hurling final will like last year be played on the same weekend as the football.

The GAA’s Head of Games Administration, Feargal McGill, is of the view that the CCCC hasn’t done badly in recent years, finding the dates to conclude the leagues. He defends the current schedule and believes that the association should persevere with the current footprint of fixtures.

“A lot of time has gone into the reshaping of the GAA calendar and whereas people mightn’t immediately see the importance of scheduling the games as tightly as we do, there’s a very simple reason for it – to create as much time as possible for the club fixtures. We make no apologies for that because that’s what the association asked us to do.

“The point is that it will be largely within the window. The other huge point is that we can schedule league fixtures the way we are at the moment. The exception – those teams that end up in the Allianz Hurling League final – will end up playing longer than anticipated so there are two counties affected; or, you reschedule everything and that means 32 counties are affected.

“Which is better? I know it’s a frustration for those who are saying, ‘the league final was meant to be on 22nd March and now it’s a week later’ but if we decide to pursue a complete redrawing, we affect everyone.

“This way you’ve a chance to begin with that it will all run to plan and even if it doesn’t there isn’t major disruption.”

He says that the CCCC will look at the optimum time to schedule the free weekends but is likely to continue to plan along current lines.

“We probably need to look at where we position the catch-up weekends but at the end of the day we hope to finish the leagues by the beginning of April. There’s not a whole lot that can be done here without redrawing our entire calendar, which is something that nobody wants.”