Referee will keep up fight for greater respect for officials 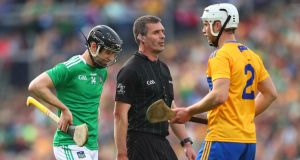 A leading match official who devised the motion calling for greater respect for referees, similar to that which exists in rugby, has promised to keep up the fight despite defeat at congress.

Joe Kelly, one of James Owens’ umpires for last year’s All-Ireland senior hurling final, drew up the motion recommending that only two players and an official from each team be allowed speak to the referee during games.

A similar rule was in place in the Celtic Challenge tournament when Kelly was part of the North Wexford management team and it was a tweaked version that he succeeded in getting on to the congress agenda.

It fell short of the required 60 per cent backing with 54 per cent of delegates voting against it, a missed opportunity in Kelly’s eyes for real change.

“As I told the Wexford county board, if 10 new referees were coming in this year, I’d say the chances are that seven or eight of them would be gone by June,” said Kelly. “That’s the level things have got to in terms of respect for referees and the abuse they’re getting. Only this morning a chap asked me was I refereeing last weekend. He said, ‘How in God’s name to do you stick it?’”

Kelly said he’s open to hearing from any of the 54 per cent of congress voters who might wish to tweak the proposal, stating he’d like to return with it.

He feels that rugby has set a high standard for respect for referees and he wants the GAA to aspire to this.

“When I’m refereeing underage games I’d always know straight away the kid that plays rugby,” said Kelly. “He stands out like a sore thumb because he’ll say, ‘Excuse me ref, can you tell me the scores?’ or he’ll politely make a query. I’d often ask afterwards, ‘Do you play rugby’ and it’s always, ‘Yes’.”