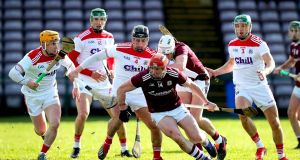 Galway’s Conor Whelan gets away from Bill Cooper of Cork during their Allianz Hurling League Division 1A encounter in Salthill. Photo: Ryan Byrne/Inpho

This was a crazy game as Galway weathered a storm of their own making on a wild afternoon in Salthill to extend their interest in this league season. Everything is up for grabs now for Shane O’Neill’s men: they play Tipperary here next weekend in what is effectively a knockout game. If they are to prosper against the All-Ireland champions, they are going to have to do so without Joe Canning. And they are probably going to have to lower their wide count also.

Racking up 2-18 on a post-storm Sunday by a Canning-less Galway team is fair scoring. They treated the home support, which got full value as well as mild hypothermia over the afternoon, to 16 wides as well. If you include a scatter of misplaced passes and the ball getting lost on the heavy pitch, this contest gave about as much as a league game could offer. Galway appeared to leave themselves in a dubious position at half time, having been so wasteful with the gale behind them at half time. They led by 1-10 to 0-10 but over hot toddies, the crowd asked the perennial spring question in Salthill. ‘Will that lead be enough?’

It must have worried Shane O’Neill that Cork had been a model of efficiency in the first half, riding out Galway’s dominant possession. If they caught a break, it was that Cork’s Robbie O’Flynn got himself sent off less than a minute after setting up Tim O’Mahony for Cork’s only goal. The centre-back broke forward and backed himself to finish on the overlap to leave Cork perfectly placed: 1-14 to 1-13 ahead after 50 minutes.

When play resumed from the puck-out, O’Flynn caught Fintan Burke desperately high with a challenge. He was disconsolate at the red card but there was no alternative. Galway dropped the hugely physical and industrious Aidan Harte back and quickly set about rescuing the game. The goal which broke the game open was the best attacking move of the day: a beautiful angled cross-field ball which left Brian Concannon facing Bill Cooper one-on-one and his finish was emphatic. From there, Galway relaxed, with Gearoid McInerney prominent at fullback alongside Darren Morriseey, who had a quietly excellent game at right-corner back.

“We probably left another two or three behind us too,” Galway manager Shane O’Neill said of the goal chances his side created.

“In February you are looking at trying to create the chances. That is what we are doing. We are having chances. We need to improve on our conversion rate. But to get the two goals are great. Probably should have got another two.”

Cathal Mannnion delivered three dead-eyed frees into the wind for the home team in what was a hugely composed second half performance: he was huge during the few minutes when Galway might have wavered.

Cork offered flares of encouragement in various sectors of the field: Eoin Cadogan was sticky on both Flynn and Conor Whelan. O’Mahony, named as a late replacement, finished as 1-1 and Shane Kingston started in ferociously bright form. But perhaps because of that devilish wind, they couldn’t get anything like the kind of necessary supply to their inside line.

After Concannon’s goal, they never gained momentum, adding just a further two points and Galway cantered away during injury time, adding four points which included a pair of dead-eyed frees from Even Niland. So they exit the league quietly after one campaign. It leaves Kieran Kingston with a gaping 10-week gap to fill. And it means that Cork will be something of a mystery to opposition teams when they next pop up, against Limerick in the Munster championship on May 10th.

“We obviously wanted to win every game and you want to be as competitive as you can in the league,” Kingston said.

“But I think we learned a lot about ourselves. We’ve tried guys in different positions. Huge change since last year’s championship. A lot of guys in different positions, as I say. New personnel in different locations and new personnel into the team. That’s been pleasing for us. Outside of not going on another game or two, and another week or two wouldn’t be any harm to get another couple of games out of it, I think the league has been good for us in terms of what we have learned more than anything else.”

The Galway crowd – 4.500 showed up in total – are still scanning the turbulent skies to see if there is to be a return to the 2017 vintage. Canning’s calf injury means he will watch next Sunday’s fare in the stands. But there was the sense of a squad gaining momentum here, with Davy Burke looking sharp on his introduction. Cork’s starting front six was held to just 0-4 from play over 75 minutes, which is a decent return for the Galway defence. They would take that next Sunday.

Dallas double sees 10-man Leeds shock Man City 14:52
Cork manager Ronan McCarthy fails to overturn 12-week suspension 11:15
Battle for Champions League: How do the contenders stand? 10:00
Lionel Messi is smiling again as Barça head into key El Clásico 10:00
‘What the film says is that you can hold on to your principles, and still emerge a winner’ 10:09
Crossword Get access to over 6,000 interactive crosswords