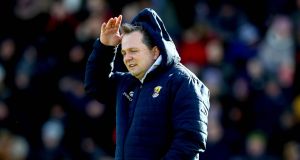 This was routine in the end as Wexford cruised to a comfortable 21-point victory over a disappointing Carlow at Wexford Park, to claim a quarter-final spot.

Wexford were officially through to the quarter-finals, but a home victory coupled with a Clare loss would have seen them leapfrog the Banner County into the semi-final but with results going as expected, the Model County had to be satisfied with a place in the quarter-finals as Clare secured that semi-final place with a convincing defeat of Dublin.

But it’s a measure of how much Davy Fitzgerald is demanding of his side as they secured the initiative from the opening minutes, never relinquishing their grip on proceedings as they dominated right through the pitch, giving an outstanding team display to go along with some excellent individual performances.

Already doomed to a relegation playoff, Carlow showed it in their play by failing to match the momentum of their opponents, but they will be desperately disappointed with their 70 minutes as they succumbed to one of their heaviest defeats without offering a serious challenge.

Wexford made the bright start into the breeze by shooting into a 0-7 to 0-0 lead by the 12th minute with the in-form Rory O’Connor shooting over three points, two frees, while Conal Flood, Harry Kehoe, Jack O’Connor and Aidan Nolan also got in on the scoring act. Carlow had to wait until the 14th minute for their opening score through a Chris Nolan pointed free.

Carlow were given brief hope when Diarmuid Byrne forced home a 19th minute goal to reduce the deficit to 0-7 to 1-3, but with Wexford responding with a string of points to go along with a Rory O’Connor goal from a free, the home side led 1-13 to 1-6 at the interval.

For Wexford it was a case of completing the job on the resumption. After Rory O’Connor and Chris Nolan had exchanged pointed frees it was home sub Paul Morris who took up the scoring responsibility shooting over eight points, four frees, as they totally dominated the second 35 minutes. Carlow could only manage points from Nolan frees, before Wexford completed the task with a Diarmuid O’Keeffe 69th minute goal to complete a satisfactory afternoon, while Carlow finished with 14 having full-forward Edward Byrne sent off on a second yellow card after 45 minutes.

Fitzgerald was happy with the display.

“I thought at times we played some really good hurling, hitting over some great scores. That’s the quality that’s in the team but there’s still room for improvement for the quarter-final.”

Sam Bennett has to settle for fifth in second stage of Paris-Nice 16:28
Ireland to play Qatar in Hungary on March 30th 13:46
Jacob Stockdale back in Ireland squad ahead of Scotland clash 10:50
Solskjær says Man United ‘suffered’ to end City’s streak 10:06
All in the Game: Paul McGrath is a God in Ghana 10:00
Crossword Get access to over 6,000 interactive crosswords