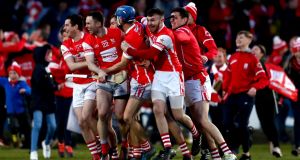 Among the projections of the Towards 2034 – the 150th anniversary of the GAA report is a recommended reorientation of the Association away from what is seen as its overwhelming focus on intercounty fixtures and towards other aspects of its activity.

“The committee envisages that by 2034 the topic of the day will no longer revolve solely around the intercounty games but will focus and recognise the contribution of local GAA clubs, club committees, county boards and national structures.

Instead, it adds: “The real strength of the GAA family will be determined by club membership, volunteers and levels of participation in GAA activities.”

In order to assist with the current initiatives intended to increase the time available for club activities, the reports suggests a demarcation line between seasons.

“It is imperative that the Association creates separate and distinct playing seasons for intercounty and club championships in order to provide a regular and meaningful schedule of games for all players and, in turn, recognises the important ongoing work taking place in this regard at the time of writing (November 2017).”

It also envisages, “that by 2034 the GAA will have become more self-sustaining with a reduced reliance on external commercial interests and an increased emphasis on providing enhanced playing and spectator facilities and services.”

The report is particularly strong in relation to the involvement of women, calling for the uniting of all Gaelic games under the GAA umbrella and for the introduction of targets for integration.

“The committee foresees a central role for women across the decision-making and organisational structures of the GAA by 2034. This will be supported by a ‘One Club’ model (One Club Guidelines, 2017) under the direction and guidance of a GAA governance structure with responsibility for all sports codes incorporating Gaelic Games: men’s and women’s football, hurling and camogie, rounders and handball.

“It envisages that the GAA will become, as part of its mission, a beacon of best practice in gender equality in terms of clear pathways for progression, participation levels, official status, administration arrangements, management positions and Board membership.

“This will involve the establishment of clear annual targets between now and 2034 delivered on the basis of Key Performance Indicators (KPI’s) which are regularly measured for success and progression.”

The declining competitiveness in inter-county competition is addressed by a call for tiered championships to replace the provincial system, which it is argued is now a barrier to games development.

“The current imbalance between counties, both nationally and within provinces, is already having a detrimental effect on inter-county championship competitions in terms of aspirations and the morale of officials, mentors and players.

“It could be argued that the provincial system, as presently constituted, is an impediment towards progress and, in effect, could be counter-productive to the development of Gaelic Games in less competitive counties.”

There is also a focus on the GAA reaching out both in terms of an increasingly multicultural Ireland but also in an international context.

“The GAA has the opportunity to engage with significant groups, communities and individuals, both in Ireland and abroad, whose national identity is decidedly non-Irish and with those whose familiarity with the GAA may be fleeting.

“Without identifying, prioritising and resourcing engagement with such groups and communities the GAA could miss a significant opportunity to develop its games both at home and abroad.

“The aim of enlisting a broad a spectrum of people in the creation and development of more inclusive, multicultural and diverse communities suggests that the GAA must be active in catering for the needs of both men and women, people with disabilities, those who identify themselves as other than Irish and those with little or no engagement with the GAA within Ireland and abroad.”