Kilkenny and Wexford get intimate again in league semi-final 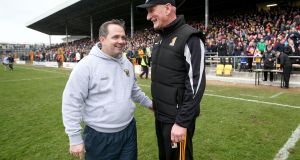 None whatsoever. Brian Cody’s assertion that Kilkenny’s suddenly intense intimacy with Wexford counts for nothing in the bigger scheme of things may ultimately prove true – but that doesn’t mean we can’t have some fun with it.

Sunday’s Allianz Hurling League semi-final at Innovate Wexford Park marks their fifth meeting within the past year – and the second in three weeks: the score currently reads 3-1 to Wexford, Kilkenny’s win coming in the last round of the league, thus denying Wexford a four-game winning streak which according to reliable sources was last achieved back in 1955-56.

At stake on Sunday, however is more than just that recent record – Kilkenny seeking a first league final place since 2014, which was also the last time they won the title; Wexford’s last appearance in the decider was in 1993, and they last won the division one title in 1973.

Neither Cody nor Wexford manager Davy Fitzgerald would say no to a league final. Whether or not Sunday’s result will mean nothing whatsoever in the scheme of their championship meeting in June only they know.

What is certain is that Cody is still short several first-choice players: defender Paul Murphy and forward Colin Fennelly are still on a peace-keeping mission with the 111th Infantry Battalion in South Lebanon, and not due home until May, possibly ruling them out of the opening two games of the new Leinster round-robin championship against Dublin (May 13th) and Offaly (May 20th).

Galway are then up on May 27th, before Kilkenny have a two-week break before facing Wexford again in June 9th.

Goalkeeper Eoin Murphy has also missed the last few rounds while nursing a neck injury, but could be back in line for a place this Sunday: Darren Brennan has proved an apt replacement in the meantime, although Kilkenny actually started their league quarter-final win over Offaly without a replacement goalkeeper.

“With the two-week break, [Murphy] should have a decent chance of getting back,” said Cody. “He is the one player that might have a chance to get back.”

Richie Hogan (back) and Kevin Kelly (knee), however, remain on the long-term injury list.

It’s just over a year since Wexford beat Kilkenny in the 2017 quarter-final, their first league victory over the neighbours in Nowlan Park since 1957. Wexford followed that up with their Leinster semi-final win last June, their first championship victory over Kilkenny since 2004; then in January, back in Nowlan Park and despite trailing Kilkenny by eight points early on, Wexford made it three victories on the trot.

These are followed by live coverage of Tipperary against Limerick from Semple Stadium, the All-Ireland Colleges hurling final between St Kieran’s College from Kilkenny against Presentation College, Athenry also on TG4’s YouTube channel at 5pm.

Sunday’s live coverage from Croke Park begins at 1:30pm with live coverage of Cavan against Roscommon and Dublin against Galway; Wexford against Kilkenny goes on live on TG4’s YouTube channel at 2pm while this match will also be broadcast in full on TG4 at 5:45pm.

PATHS TO THE SEMI-FINAL