To wear or not to wear: Gumshield use a live issue across many sports

Wearing of gumshields is not mandatory in rugby, hockey or basketball 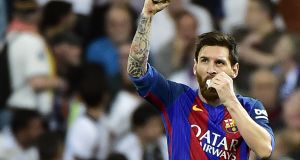 You don’t have to search too hard to find the image of Lionel Messi spitting out a tooth after getting an elbow from Marcelo in an El Clásico match. Or to realise that he is not alone. There’s a YouTube video montage of 15 footballers who have received a similar fate in the course of a match, among them Irish internationals Josh Cullen and Robbie Brady, while there is also one of a flying Messi elbow which was responsible for Inter Milan’s Maicon also spitting out teeth onto the turf.

Across all contact sports, the issue of gumshields – and their use – is a live one. While it is a rarity to find soccer players actually wearing the mouthguards, it comes as a surprise – in truth – to discover that the wearing of gumshields is not mandatory in rugby, or hockey, or basketball.

If you want to discover the real trendsetters, you will find that the GAA’s stance is the most hard line of all. It is mandatory for all players, from underage up to senior intercounty, to wear them.

The GAA passed its motion compelling all players to wear gumshields at congress back in 2013 and, from a young age now, it is accepted as part and parcel of the set-up. The penalty for a player not wearing a gumshield is a caution and, if he or she persists, then it is a dismissal. There is no grey area. You might even recall Kildare’s Eoin Doyle being given a red card for not wearing one in a game a couple of years ago.

Yet, compulsory use of gumshields is something which has not spread across all sporting codes. For example, there is no mandatory use of gumshields among rugby players. Indeed, you’ll see images of a number of Irish internationals not wearing them, CJ Stander being a case in point.

The IRFU’s guidelines on the wearing of gumshields states that it is “strongly recommended . . . for players at all levels of the sport during training and games. The IRFU advise clubs and schools to adopt an approach of ‘No Mouthguard, No Play’.” But the bottom line is that it is not compulsory even though a study in New Zealand found a 47 per cent reduction in injury dental claims when the governing body there made it compulsory to wear them.

Why have many rugby players, among them high-profile ones, opted not to use them? The feedback quotes reasons of “discomfort”, “gag response”, “breathing problems”, and difficulty in communicating.

Gumshields come from the basic boil-and-bite model which can be purchased in all leading sports shops – with Opro, Shock Doctor, Makura, O’Neills and others catering for the market, with over the counter prices ranging from as little as €3 upwards – to custom-made mouthguards, with many dentists around the country tapping into an ever-growing market as awareness and education of the use of such dental protection improves. Custom-made gumshields usually cost in the region of €40-€80.

Jim Murphy’s pathway into customised gumshields followed a rugby playing stint of some 23 years and a career in sports marketing before establishing Impact Gumshields, now a market leader in the production and supply of gumshields.

“We go into schools and clubs throughout Ireland and the UK now , with our scanners and take digital scans of people’s mouths. The traditional method is taking putty impressions, where we take a digital scan. We’ve invented our own software, the patent is pending on, and our own 3D printing filament print,” explained Murphy.

“Working with experts, we’ve invented the software that allows us to take the digital scan and take a 3D printable gumshield and print it on one of our 10 printers we have here in our office in Sandyford.

Murphy, for his part, finds it “unbelievable” that other sporting bodies have not followed the GAA’s lead in making the wearing of mouthguards compulsory.

“Studies prove the importance of wearing a gumshield, and wearing a custom-fit gumshield does help prevent the incidence of injury dramatically. If you break any bone in your body, it can self-heal, it can repair itself with [medical] direction. If you lose a tooth or break it in half, it can’t grow back.

“If you’ve lost a tooth, you’ve lost it for life and you have to look at implants or root canal surgery . . . in custom-fitting gumshields, we ensure the fit is perfect to the individual’s mouth so they are not taking out and chewing on it, which you would see a lot of younger kids doing [with boil and bite ones].

“I have seen hockey players coming in here with four missing teeth because they have got an elbow and they weren’t wearing gumshields. That’s going to cost them tens of thousands of euro in their lifetime, as well as lacerations, surgery.”

An Irish Dental Association conference in Galway last year was informed that up to 20 per cent of players involved in contact sports are likely to undergo serious dental trauma.

Dr Sally McCarthy, who specialises in sports injuries, told the conference: “Beside the physical pain, it is estimated that lifelong treatment for serious dental trauma can cost between €5,000 and €20,000. Using a mouthguard can help avoid chipped or broken teeth, nerve damage to a tooth or even tooth loss. They also limit the extent of injuries to lips, the tongue and the soft tissues of the mouth.”

For many children getting into team contact sports – be it rugby or hockey, GAA or basketball – the first experience of a gumshield is likely to be one of the over-the-counter boil and bite products. The question is, when to start with custom-fit gumshields?

In Murphy’s opinion, such custom-fit gumshields should become part of a player’s essential accessories as soon as an adult tooth appears.

“I understand as parents, there’s a lot of money spent on kit and stuff, but once you have some adult teeth in your upper jaw you want to keep those protected and you should get a custom-fit. There is a big thing around education and awareness.

“Anyone who makes custom-fit gumshield will create a space for that cavity for the tooth to grow into, so you get longevity. I’d expect [anyone] to get a full playing season out of the gumshield.”