Gilroy and Farrell the favourites to succeed Jim Gavin 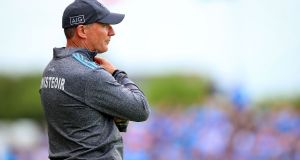 The biggest surprise about Jim Gavin’s departure is the timing. That he might step down after making history with September’s five-in-a-row was not considered outlandish at the time but the more weeks that passed afterwards the more likely it appeared that he would stay for an eighth year in charge.

Maybe the fact that the succession stakes are so limited makes it less inconvenient for Dublin to find a replacement, but there’s no escaping the conclusion that had the decision emerged a month earlier it might have been optimal timing.

His statement is classically gnomic in that he ‘hands back the reins to the county committee,’ which to long-term observers will appear as classic Jim Gavin - not retiring nor stepping down but simply handing over the controls.

There has however been plenty of speculation in recent times that the specialised nature of his career in the aviation industry meant that he would have struggled to combine advancement with an ongoing part in one of Irish sport’s most demanding roles.

The announcement came out of the blue early on Saturday with the players told at a meeting in the Innisfails club this morning. The team holiday is taking place in the coming weeks and whoever takes over will have to spring into action quite quickly.

His backroom team, including long-time adviser Declan Darcy, have also called a halt to their involvement and so a new management will be required by Dublin. Ultimately, the choice comes down to former manager Pat Gilroy and underage All-Ireland winning coach Dessie Farrell.

Gilroy obviously has the advantage of having managed a senior All-Ireland victory with Dublin in 2011, a first title in 16 years, which kick-started the most successful decade in the county’s history, and the cultural adjustments necessary to achieve it.

But his business career is very demanding and influenced his decision to step down in 2012 as well as in the summer of 2018 when he drew to a premature conclusion his slightly surprising tenure with the Dublin hurlers. Were he to be available, the chances are that Gilroy would be appointed although experience suggests that it mightn’t be on a long-term basis.

None of which overlooks Farrell’s credentials as an All-Ireland winning manager at both minor (2012) and under-21 (2014 and ‘17) level, the latter grade which was Gavin’s main calling card on his appointment seven years ago. Farrell guided Dublin to the last under-21 All-Ireland in 2017 before the grade was re-drawn as under-20.

He stepped down from management after that win and appeared to rule out involvement at senior level but that was at a stage when Gavin’s term of office was due to expire later that year.

“Yeah,” he said at the time. “I don’t think so. My roots have been in the development squad stuff and through to minor and the natural evolution was to take on the 21s. The senior is a whole different ball game. The time commitment that’s required at that level - like this is ridiculous but at senior level it’s gone to a whole new level. . .”

He may take a different view now if approached.

Whoever takes up the reins will have a lot to do. The rhythm of the Gavin years had involved a development team taking part in the pre-season O’Byrne Cup while the front-liners rested. A new manager may wish to put everyone through their paces.

There will be renewed speculation about the future of captain, Stephen Cluxton, who will be 38 in a few weeks but who also has had a brilliant season, winning a sixth All Star and being voted Footballer of the Year by his peers. At November’s All Stars awards he was asked about his intentions by RTE’s Joanne Cantwell.

“Obviously in your heart,” he said, “you love playing the game. You want to come back; you’ll do anything to play - the mind, the same thing - but it’s probably the body. I probably need to sit down with the physios and doctors and see if I can get through another year.”

Pressed if he was saying there was a chance he’d be back, he replied: “A small one, yeah.”

Assumptions up until Saturday were that he probably would stay on but latest developments may complicate matters.

One way or another, an era has ended and it’s hard to believe that other counties won’t feel slightly more optimistic, as they anticipate 2020.