Six of the best: Looking back at Jim Gavin’s All-Ireland final triumphs 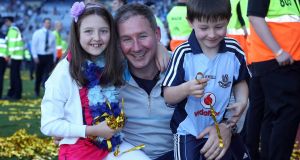 Dublin manager Jim Gavin with his children Yasmin and Jude after the 2013 final. Photo: Donall Farmer/Inpho

Jim Gavin, his first season as manager after Pat Gilroy, just about gets Dublin over the line, forced to leave on a clearly concussed Rory O’Carroll and a hamstrung Eoghan O’Gara, after Mayo start strong, up 0-8 to 1-2 after 26 minutes, only to surrender at the death, Cillian O’Conner’s injury-time free reducing the gap to one, the suggestion afterwards being he thought there was more time to be added. There wasn’t. This was also the game where after which Gavin remarked with an entirely straight face that other teams were already ahead of Dublin in their preparations for 2014. It also completed his dream debut season where he guided Dublin to the Allianz League titles, beginning a four-in-a-row in his first four spring campaigns, followed by another victory in 2018.

The day Jim Gavin and Dublin celebrated an All-Ireland victory as sweet as it was unsightly. Undermined by the torrential rain, which together with a nervousness that appeared to afflict both teams led to a high error count, it was the lowest scoring in 12 years with few players able to give of their best.

It proved though that Gavin’s Dublin team could win ugly, if they needed to. It was also sweet in that was the first time Dublin have beaten Kerry in three successive championship encounters (after 2011 and ‘13) and two successive final contests. Gavin’s team had also been living on the edge since losing their 2013 crown to Donegal the previous year and they went into the final under the shadow of suggestions that they’d lost their nerve and would struggle. Gavin again proved that suggestion wrong, on both counts.

Mostly likely Gavin’s least comfortable final on the side, a game of chance. Mayo manager Stephen Rochford replacing David Clarke with Rob Hennelly in goal, only for that to backfire on 40 minutes: Lee Keegan’s first-half goal had given Mayo the edge, Hennelly’s fumble forcing him to haul down Paddy Andrews, and Diarmuid Connolly drove home the penalty.

Cillian O’Connor hit three frees in the frantic last 10 minutes, but missed his last, into Hill 16, which drifted just wide, and Dublin survived, just about falling over the line.

Jim Gavin’s dream start to a game still proved one of his most challenging.

Diarmuid Connolly came off the bench to find some cracks, but still it took an injury-time free from Dean Rock, despite Lee Keegan’s best efforts to distract him, to win, a first three-in-a-row for Dublin since the 1920s. It was Mayo’s ninth All-Ireland final loss since their last win in 1951, also drawing in two.

You can’t win five unless you win four first. With ever increasing expectation and pressure, and against a new team of finalists in Tyrone, Jim Gavin duly delivered fourth successive All-Ireland title with a particularly rampant performance and straightaway the fabled five became the story of the next season.

The Ulster men threw everything at this but finished, like Mayo and Kerry before them, standing in a group watching Dublin celebrate and wondering what can be done about the power, skill and extraordinary will of Gavin’s team.

It was a strange, frantic game, Tyrone starting well, but ultimately dominated by Dublin’s composure and athleticism, football skills and relentlessness for the first to 78th minute. The champions never looked liable to cracking in the fraught closing minutes with points from replacements Kevin McManamon and Michael Darragh Macauley keeping them on course for a six-point win, their biggest in an All-Ireland final for 41 years.

As crowning moments go this one will always stand out on its own, Jim Gavin becoming their first manager in either senior football or hurling to successfully navigate the previously uncharted: the five-in-a-row.

In years ahead September 14th, 2019 will appear as the date that something never before achieved in the GAA’s 135 years happened, and Gavin was the man behind it.

After enduring the thriller of a drawn final, where both teams had their chances of winning and losing, Gavin found himself under previously unknown pressure too, with some big calls to make too. Eoin Murchan was brought in before throw-in to allow James McCarthy take Michael Darragh Macauley’s place at midfield, and even by Gavin’s own record it proved something of a masterstroke, when from the throw-in for the second half, Murchan took off at searing pace and scored the goal that ultimately changed the direction of the game.

Even in the aftermath it was pointed out that this doesn’t make Dublin the best team in history, but it makes them the most successful. Teams can only play in their own era. In delivering his sixth All-Ireland title in seven seasons, the only blemish that distant semi-final ambush by Donegal in 2014, Gavin also won a seventh successive Leinster title, by a cumulative 94 points, his championship record in all reading: 48 games, 44 wins, three draws, one defeat,