Conlon and Clare eager to return to winning ways 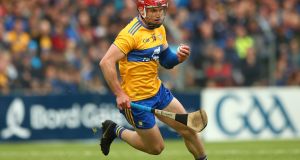 John Conlon: “They’re a great management team. Brian has done so much for Clare hurling as a player and has a good record as a manager.” Photograph: James Crombie/Inpho

If 2018 went down as John Conlon’s best season, this year provided a glum counter-balance. Awarded his first PwC All Star 12 months ago, his influence at full forward had been a major part of Clare’s first championship appearance in Croke Park for five years.

Now, in the sunshine of Abu Dhabi on the All Stars tour, he reflects on the shade cast by a 2019 that never got any traction. Injury undermined his own performances and the county’s uneven championship displays culminated in failure to qualify from Munster.

Throw in a messy and badly-handled wrangle over a change of management and it proved a year to forget.

“It was very disappointing. I suppose we went in with high hopes and the management put a lot of responsibility on us to perform again after having a good year, the year before and re-establishing ourselves as one of the top counties.”

Without being unduly alarmist, there is an anxiety to accompany the disappointment. What if 2018 was the best chance to emulate the great achievement of the 2013 All-Ireland? Taking the then champions Galway to a semi-final replay must prompt thoughts of what might have been.

“Yeah, I was only going to training with one of the lads the other night and he just said it takes so much hurling now to win an All-Ireland and you need that bit of luck as well.

“We got so close the year before and I remember saying it to a few lads, ‘you know, it takes a lot of hurling for another 12 months to get back to this position again and a lot of things to go right for you’.

“Like, you can even see with Limerick this year. To me, they were probably the best team in the championship. At the time they were playing great hurling and really flamboyant. But they got caught by Kilkenny in the semi-final and it just shows you that you have to be ready for every game, every day.”

He knows all about the vagaries of form. Having been hailed last year on The Sunday Game by former Clare All-Ireland-winning captain, Anthony Daly as “the father figure of the team” and earning a consensus All Star at full forward, Conlon endured personal frustration this year.

By his own admission, he wasn’t 100 per cent all season, having suffered a knee injury at the end of the 2018 championship.

“No, I came back from a partial tear in my PCL (posterior cruciate ligament) in the semi-final the year before and I didn’t come back until January and the management said the best way to get fit was to play the league games, and sure I tore all my ligaments in my ankle then against Wexford in February so I hadn’t really had any off-season. I didn’t really get that fit.

“All of a sudden you are five weeks out from championship and you are trying to maybe do too much. You are nearly training most nights in the week to try and get back into the shape and confidence then and get everything firing for the championship.”

An underwhelming championship was followed by management upheaval. Joint-manager Gerry O’Connor announced that he wouldn’t be seeking a further term but his colleague Donal Moloney, who had the support of the players, was keen to continue – at least until weeks of inaction from the county board convinced him he was wasting his time.

The procrastination was also frustrating for the players and only in recent weeks – despite the obviousness of his candidacy – was former captain and All-Ireland-winning full back Brian Lohan appointed. Conlon says that the team was as much in the dark as anyone.

“Especially where I live, closer to Limerick down in Clonlara, we wouldn’t hear a lot from the Ennis side which is about 30 or 40 minutes away from us. It was just kind of rumours and seeing through text messages.

“When news broke, as players we were just texting each other over and back saying, ‘what’s going on?’ because we didn’t really know. Yeah, it’s just frustrating when you’re not informed and kept in touch. At the end of the day we’re the ones training for four or five nights a week and putting a lot on hold for the good of Clare hurling.”

Now, restored to fitness, he is optimistic about 2020 and enjoying the early dealings with the new Clare management.

“They’re a great management team. Brian has done so much for Clare hurling as a player and has a good record as a manager with UL, winning the Fitzgibbon. Yeah, you’d have massive time and respect for what he’s done for Clare hurling.

“I wouldn’t have met Brian much on a personal level but, yeah, the last two weeks have been very enjoyable. We’ve done a lot of hurling and played a lot of games against one another. There’s a big panel in at the moment and it’s good to see a lot of lads back playing that maybe had taken breaks for the last few years.

“Yeah, it’s positive at the moment.”