Ballyboden swat Garrycastle aside to reach another Leinster final 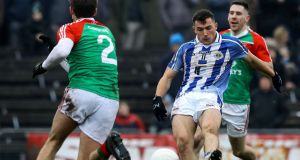 Ballyboden rumble on, the rest of Leinster at least looking like little more than flies on their windscreen. They haven’t lost a game in league or championship in 2019 and it falls to Éire Óg of Carlow to find a way to prevent that run seeing out the year. On this evidence, it looks unlikely.

They walked through Garrycastle here with barely a pause for breath. They were six ahead inside the opening 10 minutes, eight up at the break, 11 at the end. With Robbie McDaid running the show from centre-back and the Basquel brothers partying up front, they had the Westmeath champions on the run for the whole afternoon. All this, and they’re still not throwing on Michael Darragh Macauley or Conal Keaney until the last quarter-hour in any game. They will take a significant amount of stopping.

Down in the tunnel afterwards, Dessie Dolan Senior walked past with a quiet word. “An emotional day, lads,” said, referring to the fact that Dessie Junior had just played his last game of football. The 40-year-old forward was always pulling the laces out for good whenever Garrycastle’s 2019 journey ended. When he came off the pitch with 10 minutes left and the game long gone, everyone in the stand got to their feet to applaud him off.

“He still has it, you could see it. Dessie could play for another two or three years. But it comes to a stage in life when you hit 39 or 40 or beyond that that your body says, no more.”

Dolan kicked seven points here, all but one of them frees. Truth be told, he was Garrycastle’s sole outlet in the forward line as Ballyboden dominated the middle third. Winter football can be simplified very quickly if you win all your own kick-outs and contaminate the majority of the opposition’s. For long stretches of the opening quarter, Garrycastle couldn’t get past midfield. The scoreline generally takes care of itself when that’s the case.

McDaid was immense at centre-back for Ballyboden. He galloped on at every opportunity, adding an extra body to the Boden attack and popping up off the shoulder as an outlet. Six minutes in, he galloped down the middle of the Garrycastle defence and with the Basquels and Ros McGarry scattering like students at the shout of sketch, the way was left clear for McDaid to bury his finish past Sean Brennan. Colm Basquel, Alan Flood and Ros McGarry all followed up with quickfire points in the spell that followed and Boden were already 1-5 to 0-1 ahead with just 12 minutes gone.

The Dublin champions have supreme conditioning but it was their shooting that put this game beyond all quarrel. They put up 1-10 from 15 shots in the first half, the sort of total  that generally puts clear water between you and the opposition in winter football. Garrycastle could only manage five points in reply.

To their credit, the Westmeath champions gave it a bit more holly after the restart. Dolan kicked four of the first five points of the second half, all from frees. But while Ballyboden were slightly listing through this period, McDaid drew them out of their mini-funk, setting up McGarry for one point and scoring another himself.

“We looked at the Newtown Blues game and especially in the first-half of the game we were probably a bit eager to get forward and to try to get the shot off,” said Rainbow. “We talked about being a bit more patient and we were a bit more patient in the first-half. We weren’t bringing it down the middle channels where it was blocked up, we kept working the wings the whole time and eventually those gates did open up. Robbie was phenomenal again today, he scored 1-1 and held that central position very well.”

Even when Garrycastle did manage to get within sight of goal, they found Darragh Gogan an obdurate so-and-so in the Ballyboden goal. Gogan made three saves in the closing 15 minutes, the pick of them the middle one from substitute Jason Nugent. It would be a stretch to say that had any of them gone in, we’d have had a game on our hands. Gogan made sure it was never a discussion all the same.

Bohemians appoint climate justice officer 10:00
Jordon Ibe has been ‘in a dark place’ with depression 09:10
Tokyo under ‘real pressure’ amid rumours of Olympics cancellation 07:20
Jerry Kiernan’s death felt beyond athletics; tennis stars show their full sense of entitlement 07:08
Brandon Nagy reels off 10 birdies to lead at American Express 06:41
Crossword Get access to over 6,000 interactive crosswords