Ballygunner appeared in a commanding position before Kieran Maher’s goal 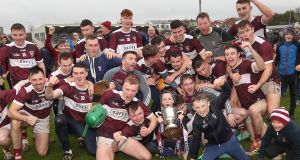 A storming last quarter helped Borris-Ileigh crown a memorable year for Tipperary hurling by defying the odds to lift only their second Munster club title in difficult conditions at Páirc Uí Rinn on Sunday.

Ballygunner, who were appearing in their 11th final, looked the more likely side, when holding a 0-10 to 0-7 half-time advantage, which was quite sizeable given the game was affected by incessant rain with the floodlights on for the 2pm start.

But the tie turned in the 45th minute with the opening goal, tucked away impressively by Kieran Maher after Ray McCormack sent him clear with a telling pass.

It brought the sides level for the sixth time and was a huge boost to Borris-Ileigh, who had struggled up front up to then.

The inspirational Brendan Maher then fired over a magnificent point, showing a fierce determination to beat two opponents to the loose ball before finding the range from the left.

Borris-Ileigh were now in front for the only the second time, having opened the scoring through Jerry Kelly in the first minute. And they received a further boost with Kevin Maher’s surging run, which drew the foul, leading to Maher’s sixth point and a 1-9 to 0-10 lead with 10 minutes of regulation time remaining.

However, Ballygunner, who had lost eight previous finals, replied in the style of champions. Former soccer player Dessie Hutchinson spotted Barry O’Sullivan all alone and his finish to the net decorated the glorious cross-field pass.

At this point the Waterford champions crept back ahead, 1-10 to 1-9, but there was plenty of time left for more drama and excitement. Borris-Ileigh restored parity for the seventh time with another Kelly point only for Conor Sheahan to nudge Ballygunner ahead again, 1-11 to 1-10, in the 54th minute. That proved their last score, however.

Within a couple of minutes, Maher’s sixth point and his fourth free, had the Borris-Ileigh contingent in the 2,663 attendance in full voice, tied yet again at 1-11.

The winning point came two minutes from the end of the hour, Maher pointing from a close-range free after Niall Kenny won a great ball in the air and was then fouled.

Even with three minutes’ additional time, the holders couldn’t find a way back, leaving Borris-Ileigh in dream-land at the final whistle.

In the opening half the sides were level five times inside the opening 18 minutes before Ballygunner opened a gap by claiming four of the next five scores to lead by 0-9 to 0-6 at the interval.

Hutchinson was the stand-out figure in the period, scoring three points from play, though Kelly’s point from a sideline cut in the 15th minute showed what the Tipp champions were capable of producing in demanding conditions.

Ballygunner hit three in-a-row with Hutchinson accounting for two and the hard-working Paddy Leavy the other as they turned around three clear.

Scoring became more problematic on the change of ends with both defences on top and a fierce battle continuing in a congested middle third.

The third quarter yielded just two scores, a Maher free cancelled out by Pauric Mahony, but the tie exploded into life with Kieran Maher’s goal as Borris-Ileigh lifted their game to new heights to be deservedly crowned provincial champions.

2 Messi’s red-card outburst the act of a desperate, hopeless man

David Alaba reaches agreement to join Real Madrid on free transfer 07:33
Arsenal back in the top half; Maybe it’s time for AIL top tier to go semi-pro? 06:55
Different Strokes: Lee Westwood knows recovery is key 06:30
French Light can provide landmark winner for Keri Brion 06:00
Waiting Patiently to drop back in trip at Ascot 06:00
Crossword Get access to over 6,000 interactive crosswords