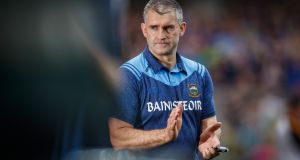 Liam Sheedy: “We’re all down at the bottom of the hill now, bursting to get up. It’s going to be another enthralling championship. Standards are very high.” Photograph: Oisín Keniry/Inpho

Liam Sheedy, manager of this year’s All-Ireland hurling champions Tipperary, has paid tribute to his football counterpart Jim Gavin, who announced the end of his tenure with Dublin at the weekend – describing his achievements as ‘immense’.

Sheedy, speaking on the PwC All Stars hurling trip to Abu Dhabi, has the added insight that his first spell as Tipp manager ended with an All-Ireland victory in 2010 after which he stepped down for business reasons. He says the decision was difficult because of the relationship established with players and management colleagues.

Sheedy also felt the experience of managing a team was more useful and relevant to a career than academic qualifications.

“I think you get a huge personal learning. You get to upgrade your own leadership skills because you get things wrong and when you do, you learn a lot from that but as I said, trying to keep all of the balls in the air is not easy and when I look at Jim, having done seven years, it’s a phenomenal investment of his time and Dublin is a massive, massive operation. It’s always in the spotlight and there is the expectation that’s been there for the past number of years.

“To have done what he’s done is just immense. No different than myself, I’m sure it’s never an easy decision to walk away but to find yourself in a situation where you can’t keep all of the balls in the air and not be able to do the job you want to do – that would eat you alive.”

Sheedy’s issue was that a promotion with Bank of Ireland earlier in 2010 relocated him from Munster to Dublin, making what he calls the ‘pillars’ of his life – family, work and team management – hard to reconcile.

Tipperary’s success in August has given Sheedy the opportunity he couldn’t take nine years ago to try to lead the county to a first back-to-back All-Ireland success in what next summer will be 55 years. That is now his focus and he believes that the team will need to improve to attain that goal.

“As far as we’re concerned the chapter is closed on 2019. We’ve got our medals and we’ve done very well and we’re delighted. Only one team has the opportunity to go and win it again after winning it and we’re thrilled to have that opportunity. What we’ll focus on is just being better in 2020. I think if we are better than we were in 2019, that gives us a chance and if we’re not, we’ll be also-rans.

Sheedy also had to manage a radically changed championship format compared to his previous term a decade earlier – the provincial round robin. Tipperary hadn’t even qualified from it in 2018 but this year ploughed through Munster with a 100 per cent record

“The good news is that you have a calendar now. Matches are laid out for you very clearly. You do have to time it and it’s very hard to peak three or four times over the course of a season.

“It’s really about understanding the players and how many miles they have on the clock and making sure that when it comes to the business end of the championship they have the energy required. That’s something that we’re all very conscious of and we’re also alert to the data.”

He references the way in which Séamus Kennedy and Barry Heffernan hadn’t been in the frame earlier in the season but both of whom finished very strongly in the All-Ireland defeat of Kilkenny.

“I would compliment the strength of the panel that really came home for us. The Jake Morris’s, Willie Connors and Mark Kehoe’s were coming in and finishing the job for us in really important matches.”

He is non-committal on the question of whether in the current system, a team almost needs a speed bump so that they can reset although both Tipperary this year and Limerick 12 months ago, lost heavily in their last match in Munster – in Tipp’s case a mauling by Limerick in the provincial final.

“It’s very difficult to win eight matches out of eight. That’s the thing and if you do have a blip in the road – we were lucky in that our blip came at a time when we could recover at the start of effectively a new championship. Now, if you ask me honestly, had I a choice between winning the Munster final and losing the Munster final, I would have chosen to win it.

“I place huge value on Munster championships and won two of them in 2008 and ’09 the last time around so I’d go into a championship on its merits but we all had a day when things didn’t work out.

“We’re all down at the bottom of the hill now, bursting to get up. It’s going to be another enthralling championship. Standards are very high.”