Timeline analysis: Throw-ins and efficiency win it for Dublin 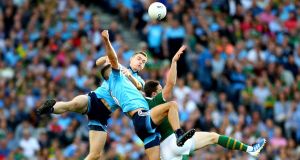 Over the drawn and replayed finals Dublin won three of the four throw-ins at the start of each half. All were scrambled contests, and they scored 1-2 off those wins. At the start of this match Con O’Callaghan set the tempo with an early point off his left foot. His first of four in a powerful performance.

Brian Fenton was intent on making more of an impact on this game than he did two weeks ago. He made a strong run, turned and assisted Paul Mannion for Dublin’s fifth point. At this stage Kerry had kicked in three long balls to the Dublin square and gained nothing from them. At the other end Dublin were taking no chances.

Kerry decided to run it this time and Brian Ó Beaglaoich broke the Dublin line, the ball made its way across the square to Paul Geaney and his goal effort was blazed over. Goal chances were few and far between for Kerry and this was a decent one.

David Moran carried the ball half the length of the field, handpassed to David Clifford who passed to Stephen O’Brien on the turn. But Mick Fitzsimons had it read. He cut across and made a crucial interception. Kerry levelled matters a minute later but Dublin were determined not to concede any goals this day and had contained Kerry’s purple patch.

From the throw-in, again, Eoin Murchan buried a sublime individual goal (even if he took far too many steps). Any Dublin hangover after losing Jack McCaffrey to injury was made up for by Diarmuid Connolly’s introduction at the interval and he added physicality and provided two quality assists.

After back-to-back points of equal quality by Clifford and Geaney, Paul Mannion kicked Dublin’s first wide. After 43 minutes - sheer efficiency won this match. Kerry looked to have survived the Dublin third quarter storm at this stage, but there was more to come.

The relentless Stephen O’Brien burst through two tackles and came in from a tight angle to the left of Stephen Cluxton’s goal. He went for power but it was straight at the Dublin captain. Yet another crucial save for him over the two games. Dublin scored next and Kerry wouldn’t get as close again.

For only the second time in the drawn and replayed encounters Dublin went five ahead after a lovely James McCarthy point from the right wing. A few minutes later Brian Howard showed bravery and heart to win a crucial kickout. Dublin saw it out from here.