Dublin’s keeper of the flame shines brightest on historic night 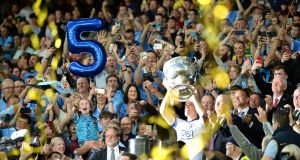 The flares went off behind the Hill and someone put Thin Lizzy on the house gramophone player and Dublin city swooned. So this was what Gaelic Football’s new world looked like.

Amid the delirium, Stephen Cluxton cut a conspicuous figure as he crossed the halfway line to become the lone Dub in Kerry country. For at the other end of the field, the Kerry men stood in a cluster but entirely alone in their thoughts as they endured the Kingdom’s darkest fantasy. The Five-In-A-Row. Achieved by Dublin. Kerry’s animus. The dream world had been breached.

This is a young Kerry team and they will almost certainly win several All-Irelands. Still. As a collective, this moment will remain branded on their soul.

The closing minutes had been ragged and bad-tempered as Dublin closed down all paths to their goal and held on to a comfortable six-point lead. The GAA’s big theatre trembled and shook through injury-time as Dublin closed in on history. But in the end, it was fairly comfortable.

Jim Gavin, the architect of this glory, stood inscrutable as ever on the sideline and had the luxury of sending in the old familiar faces - Kevin McManamon, Cian O’Sullivan, Michael Darragh Macauley, Philly McMahon - to see the evening out and usher this young Kerry side to what will go down as one of a night of heavy learning.

That’s why there was something honourable about Cluxton’s gesture. He might just become lost in the moment. He might have forgotten about everything except what this Dublin team has achieved.

But even in this crowning moment, Cluxton remained a man apart. Again, his goalkeeping was immaculate here. But in authority and singularity of purpose he has set the tone through a decade when Dublin have transformed the possibilities and expectations of inter-county Gaelic football. Cluxton will never have a second career as an after-dinner speaker. Nor would he want one.

Even on his fifth go at the captain’s speech, he remained true to his practice of thanking the GAA for organising the competition and calmly reading out the list of those he should thank. Then he lifted the big cup and disappeared into the crowd as quickly as he could. He will leave this game as he arrived: a mystery and a private figure beyond his brilliance as a goalkeeper.

But forget about the words. In the minutes of Dublin’s ecstasy, he was still leading by example. The others followed him up to commiserate with the Kerry players. It was a small, important gesture after an epic season in which he took Dublin and the old game into a new place.

Meanwhile, Ciaran Kilkenny, who had played a gargantuan game, was grabbed by the television people and trying to summon his thoughts, he allowed himself to scream: “We did it.”

That was about as loose as we will see Dublin in the Gavin era. They did it all right, even if it felt like nothing is finished. It’s not as if they are going to disappear into the sunset. Some might. There’s no doubt that some of them graced the field for the last time. But already, Dublin are the hottest of favourites to keep this unprecedented run going.

What this summer and these two finals confirmed is that their oldest enemy is on the trail now. It was a sublimely beautiful night in the city and it had, at times, glittered with possibilities for Kerry. In the end, they just weren’t cold enough and old enough to make them count. They were bullied.

They were out scrapped. They were out thought and out fought and when it was over and nothing awaited them but a long, long journey southwards, there was no escaping from the truth that a six point defeat was about accurate.

From Eoin Murchan’s sensational solo goal seconds after half-time, Kerry were playing catch-up against the champions. In the 53rd minute, Kerry went for broke. The light was declining around the city but there was no real sense of Dublin’s grip on this thing was weakening. The floodlights were on. On both sides of the river, the pubs were jammers.

On the sideline, Peter Keane instructed Tommy Walsh to remove the warm-up bib and enter the arena. Meanwhile, on the field, Stephen O’Brien was running at blue shirts for the first time in this All-Ireland series. He ghosted past one, jinked past another and looked up to see Paul Geaney loitering with intent behind Cluxton.

O’Brien is too sharp not to have seen him and knew that Cluxton was aware of his presence also. So he backed himself. Cluxton saved it. A primal release erupted from the Hill. The seconds ticked on. The moment drew closer. Dublin broke and at the other end, Paul Mannion carved out enough space to kick one of those geometrically perfect points of his.

It was that kind of evening. Dublin played in bursts of excellence. Then they soaked Kerry up. They opened the night as though intent on finishing this off before they had finished reading out the headlines on the RTE six o’clock news.

The points rolled over from the usual suspects - Ciaran Kilkenny, Mannion, Con O’Callaghan and they raced into a 0-5 to 0-1 lead. And after that, for about half an hour the game deepened and grew into a spectacular shoot-out.

David Clifford and Geaney left the field at half time with 0-3 each and there were periods when it looked as if the Kerry defence finally had Dublin’s number. The game was poised at 0-10 each at the break. It was possible, then, for Kerry to see the evening maturing into perhaps their most audacious coup. Murchan’s goal meant a chase, though. And Dublin are too canny.

In Mick Fitzsimons, in Brian Howard, in the phenomenally energetic Kilkenny, in James McCarthy ghosting forward for his usual monumentally important point, in the endless scrap in Jonny Cooper and the football intelligence of Diarmuid Connolly, back in blue for the second half, they had too much know-how. Meanwhile, the Kerry boys suddenly looked very young as the minutes drained away and the city lights began to twinkle and the Hill was in full voice.

Maybe then, as Kerry’s goalkeeper made two brilliant, futile saves on Connolly and Rock, bearing down on goal during injury time, the enormity of the challenge facing them began to register on this Kerry group. Winning the five in a row does not mean that Dublin will somehow disappear. It just means they have the chance to become the first county to win six.

And as the Dublin Male Voice choir rumbled beerily from the Hill, Kerry’s young stars began to understand that this is the new reality. In a weird way, Dublin has helped Kerry to bury the ghost of 1982. It doesn’t matter anymore. The fourth wall has been breached. Dublin have changed the old game.

Kerry threw everything at Dublin and the All-Ireland champions absorbed it. Just like Mayo, just like Tyrone, Kerry have discovered just how deep and stubborn and immovable this Dublin unit has been. Jim Gavin stood quietly with his back room team as the streamers fell and smiled underneath his cap. He seemed to be enjoying this perfect moment. Gaelic football has never been more alive in the city.