TV View: Forget about the Fix for Six, how about the Yen for Ten

For now, all of Dublin wants to ‘paaaaaaaarty’ like Ciarán Kilkenny 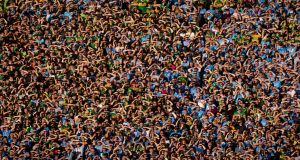 Supporters on Hill 16 shade their eyes against the sun during the All-Ireland final replay between Dublin and Kerry at Croke Park. Photograph: Tom Honan

Rare old times, indeed. Even the light was slow to decline over Croke Park, the night sky pretty in pink as Sam accompanied the Dubs for the fifth year running while they took a stroll about the pitch after the game.

The drive for five? Mission accomplished. Mind you, Ger Canning was already planning ahead. “Now it’ll be the fix for six!”

Driven as they are, you’d half guess the Dublin players were parking thoughts about a six-in-a-row for now, allowing themselves one night off at least, Ciarán Kilkenny declaring that it was time to “paaaaaaaarty”, and you sensed the gargle would dim many a brain in the hours ahead, not least in Coppers.

Dean Rock, though, armed with an exceptionally cute baby nephew wearing headphones to drown out the Hill’s ring-a-ring a-rosie-ing, still had his gumshield in when he spoke to Clare McNamara post-match, like he was all set to go again.

While Ciarán Whelan had a notion a bunch of retirement announcements were imminent, Pat Spillane was having none of it. “This crowd aren’t even remotely close to coming near retirement . . . it’ll be six-in-a-row, seven-in-a-row, eight-in-a-row, they can achieve the impossible.”

But they already had, anyone of a vintage to recall Séamus Darby doing his 1982 thing will know that five-in-a-rows don’t come easy. “I locked myself in a toilet cubicle and cried for five minutes,” said Pat when he recalled the day Kerry were denied.

Back down on the pitch, though, Stephen Cluxton had the look of a man bidding adieu, while so beamy was Jim Gavin’s grin, you sensed he felt his work was done. We’ll stand by for the breaking news. Lookit, it may never come, they may already have the Yen for Ten.

Whatever they decide, we’ll always have that first half, the sole crushing disappointment that it ever ended. “Seventeen of the 20 scores were from play,” said a swooning Pat, “it was an exhibition by both sets of forwards.”

That it was, Pat’s exhilaration heightened by the fact that he was allowed finish his sentence. But let’s not mention the Derry elephant absent from the room. Whelan was certainly hell-bent on distracting us from that absence by wearing what appeared to be his first communion suit, a maroon outfit from which he most likely had to be surgically removed once the titles rolled.

Super-sub Stephen Rochford, meanwhile, was calm, composed and incisive with his forensic analysis, although you couldn’t but pine for a bit of divilment – and fewer mentions of curveballs when it came to the panel’s assessment of the late team changes, like it was Fenway rather Croke Park.

The second half was no match for the first, Kerry no match for the Dubs once the life was squeezed out of the half-time oranges. Eoin Murchan – who still doesn’t look old enough to be even on the minor panel – set the tone with that goal, and from there it felt like a procession.

“If you command wisely, you will be obeyed cheerfully,” said Kevin McStay, dipping in to his book of useful historical quotes to sum up Gavin’s reign.

You’d have to be more churlish than cheerful not to salute them Dubs, even if Ger’s declaration that it was “a great day for the GAA” had 31 counties chucking used tea bags at their telly screens. In Dublin, at least, they’re heroes of renown.