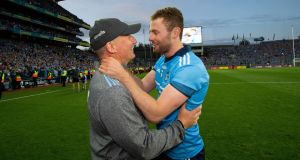 All Sams gathered, all worlds conquered, Jim Gavin came into the Dublin press conference in, well, not expansive humour exactly but something approaching it. His answers were longer than usual, his mood more reflective, his insights worthy of the name.

When it was finished, he walked up to the back of the room and took the arm of an older chap in a Dublin tracksuit who none of us had noticed was even there. “I thought you were going to ask a question,” he said to Jim Gavin Snr, before bringing him backstage with him. It’s too early to draw conclusions of any sort regarding the future of Gavin Jnr but this definitely felt different to other years.

We pushed him on what a five-in-a-row means, if indeed it means anything.

“I haven’t really thought about it like that. It is a fact, I’m not denying that it is a fact. It is great for the county, but our primary aim was to get a performance. I’m not trying to dismiss it in any shape or form, it is phenomenal for Dublin GAA for this to happen, but when you are going into a game like this you have to focus on trying to get your game plan, game and process right. That is what delivers a performance like you saw today. The result is the outcome of that. Obviously it is a fantastic honour for Dublin, absolutely.

“They are all unique, but I suppose when you are playing a team like Kerry, they have really asked questions of the guys over the last two games. I know how much it meant to the people of Dublin, the people who support the team.

“There was obviously great expectation going into it, I’m just delighted for the players really. When there was questions asked of them in both games, that they were able to come up with the answers. Whatever about reputations and what people from the outside think of them, they really showed their character for me over the last two games. So first and foremost you are just so happy for those.”

We bring up Stephen Cluxton, whose save from Stephen O’Brien’s shot on 54 minutes was so crucial to the Dublin victory. Normally when we lob these sort of player-specific high balls to him, he swats them away in short order. But again, this time felt different. He was gushing about Cluxton and went into detail about his reaction between the drawn game and the replay.

“That’s the result of hundreds of hours,” Gavin said. “I’ve seen that, if you look back on his stance, that’s not the first time I’ve seen that. Josh Moran, his goalkeeping coach, and the goalkeeping coaches that have worked with him deserve credit for that. That’s something that you see replicated. I saw it earlier on this week.

“I saw it the day after the replay, him spending two hours on the pitch with Evan Comerford and Michael Shields from Sylvester’s. The three of them working on trying to rectify his positioning for Killian Spillane’s goal in the first game. So that’s someone who’s dedicated to their craft, and the result of that is what you see in those clutch moments, to have that composure to make himself big and strong and just do his job. That’s what Stephen does – he does his job.

“He had a bloody laptop, trying to replay in slow motion what way his feet and positioning were. That somebody who’s a master of his craft. Through that example, he inspires people around him. Stephen is well able to talk, he’s very articulate and people listen. But how he demonstrates, his actions, that’s what I’m interested in. That’s what he does. He’s a doer.”

Gavin even gave a small tactical insight, something he never does, something his players never do. Talking about Eoin Murchan’s game-breaking goal, he took obvious pleasure in the fact that a training ground routine had come off.

“Yeah, listen it was a great set move from the throw-in,” he said. “Really well executed by the team collective you’d have to say. A really nice execution at the end of the move by Eoin. I’ve seen it before from him, don’t think anybody was surprised when it hit the net. You are surprised maybe to get that space from the opening play.

“Eoin did really well, he really committed himself, it is what you see from them when you are with them that often. They all have jobs to do, when we meet it is very brief. So your time is precious with them. But they are a great team, great men to work with.”

For how much longer? Nobody can say. All we can know for now is that this felt different.

Draw what conclusions you will from that.