Eamon Donoghue runs the rule over Peter Keane’s side 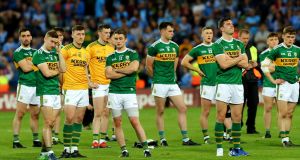 The Kerry team dejected after the game. Photograph: James Crombie/Inpho

In the first half Kerry retained all 10 of their kick-outs. And 13 from 13 thereafter. Ryan knew when to go short, and when he went long he kept it away from Brian Fenton. Double save late on too. Excellent. Rating: 8

Marking Dean Rock, he kept him relatively quiet and was composed in possession. Could’ve backed himself to score in the second half, and still conceded 0-2 from play. Rating: 6

Marking Dublin’s top scorer from play this summer, he did excellently not to let Paul Mannion inside him. But the Kilmacud man just stepped out and scored 0-4. Moved on to Con O’Callaghan but struggled there too. Joined the attack with purpose. Rating: 6

Got away with it in the drawn final against Con O’Callaghan, but this time the Dublin attacker shrugged off the foul and kicked his score or assisted. Taken to the cleaners but drove forward. Could’ve been a lot more effective used elsewhere. Rating: 6

Limped off after 59 minutes which was a big blow for Kerry. He did his best to get back into a sweeper position as much as possible and was effective at times and tenacious throughout. Rating: 6

Didn’t match the performance he gave in the drawn final, marking Ciarán Kilkenny for the large part and he had no answer to his constant movement and probing. Another to concede 0-4 from play. Rating: 6

Made an excellent break in the first quarter to create a goal chance. Tackled hard and held Niall Scully to few impacts. Rating: 6

What can you say about this man, he has everything and showed it again. Especially guts and leadership. But some of his decision making remains highly frustrating, especially for a player with his experience. Two poor wides. Rating: 7

Worked hard. Carried ball with intent and intelligence. Contested under the kickouts manfully and again Brian Fenton was held scoreless, although he was a lot more influential as the game wore on. Rating: 7

Quiet game. Kicked a tame wide. He ran hard and tackled hard which was his detail, but he didn’t play with the same belief as some of his forward colleagues. Kerry’s scoring threat wasn’t spread as evenly as Dublin’s, which was crucial. Rating: 6

Marked tightly by John Small but kicked two points from play and again slotted all of his frees. One point was from distance with his man diving on his toe. He was also involved in some excellent turnovers. Rating: 7

Your eyes tire watching this Footballer of the Year contender (if Kerry had won). His tackling was ferocious, he ran at his man all day long and nearly had a goal to show for it. Although from a tricky angle he probably should’ve taken his point. Kerry needed a scoring input from him to lift the weight off their inside line but he was busy doing everything else. Rating: 8

He tired and made mistakes late on when Kerry were forcing the issue. But overall he kicked five points, four from play. This won’t be his last final but he hasn’t disappointed in his first two. Rating: 8

You’ll forgive him for some poor decisions made late on, and another missed goal chance in the first quarter. Because he kicked four superb points from play, and was the only Kerry man to win one of the many long balls kicked in. Rating: 8

He didn’t provide the same amount of key moments as he did before his injury in the drawn match, but again ran himself to a standstill and scored a very good point taken at full tilt. Rating: 6

No scoring impact off the bench this time although the game was already getting away from Kerry by the time Tommy Walsh, Killian Spillane and James O’Donoghue were introduced. All three were lively. Jack Sherwood took a bad option when he was blocked down by Kilkenny just after coming on. Rating: 6

Peter Keane made his switches at a similar time to the drawn final but in hindsight they appeared a little late. Should’ve heeded the warning signs with O’Sullivan on O’Callaghan from day one. The armada of high balls in the first quarter did not work. Little luck on his side and still a promising first season. Rating: 6