Kerry and Dublin serve up another September classic

Killian Spillane’s goal the statement of intent his team, and county, needed 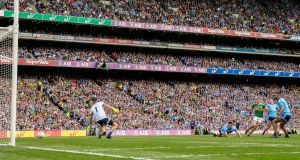 If you are looking for a moment when this Kerry team grew up - when its voice broke - Killian Spillane’s goal was it. Photograph: Morgan Treacy/Inpho

Fifty-six minutes in. You could chronicle any minute from this beautiful, silly game but let’s settle on this one. The clock is ticking all the while towards history. And the goblins and sprites are everywhere around Croke Park. Already, this All-Ireland final has deepened and grown into one of the most magnetic contests the old game has ever concocted.

It is gripping beyond belief. If you could measure the anxiety levels through the suburbs of Dublin and in the homes along the Dingle peninsula, the instrument would break. And in the stadium, the match and the emotions of the crowd have long ago left the radar. The game is off the scales. 80,000 are going through personal and unashamed breakdowns. It is too much.

Dublin, down to 14 men since Jonny Cooper left the field with a second yellow late in the first half, have found themselves in a world that is deeply unfamiliar to them. For the first time since the All-Ireland semi-final of 2014, the defeat from which they launched this era-defining run of five All-Ireland seasons in a row, they are the hunted.

Five, that is, if they can only find their way through this bewildering Kerry forest which they now find themselves. Paddy Small has launched a long range shot. They are still 1-14 to 0-12 ahead. On the scoreboard, they are in a good place. But in the stadium it is different: the ground is shifting and the Hill crowd has fallen into a contemplative and uneasy lull. But they are cheered now by the flight of Small’s shot, which is carrying a true line and looks to have the power to carry across Shane Ryan’s crossbar.

Has any Kerry player come under as much scrutiny as the Rathmore man? Here he is, with the best goalkeeper in the history of the game as his opposite number, preparing for a final in which the Kerry-kick out has been the subject of intense conversation. And he has done fine. Against the most ruthless and aggressive press in the business, Ryan has made the right decisions most of the time and a disastrous decision none of the time.

And he’s not quitting on this score, rising to claim the ball and choke the rising Dublin cheer developing in the stadium. It’s a small, significant moment of obstinacy. And now Kerry are breaking forward and Tommy Walsh is rising to contest a ball with David Byrne. The sight of the big Tralee man rumbling into the arena just a few minutes earlier had gladdened Kerry hearts and soothed fraying nerves.

Here was a touchstone: a physical link to the halcyon days of the 00s, when the business of All-Ireland winning was habitual. And here was a scion of the Golden Years. Walsh can’t get his hands on the ball and Byrne has done everything right but he loses his footing and slips and the ball scoots free and Walsh grabs it. At this stage, everything feels heightened: the tiniest error seems to promise horrible consequences. And Walsh is powering forward with the ball. He is looking for a team-mate: he’s looking for one of the younger, dead-eye assassins who are buzzing about him.

Killian Spillane makes himself available and the space in the Dublin’s full back line is, to those watching on the upper tiers, shocking. Spillane has the posts at his mercy as he carries the ball: it’s a dead cert point. But he doesn’t own that surname for nothing. Here’s one of the Kerry juvenile golden horde and he has a sense that the All-Ireland final needs a declaration of Kerry intent. He cuts inside the Dublin cover.

If you are looking for a moment when this Kerry team grew up - when its voice broke - this was it. The finish was clean and emphatic and everything - that old imperiousness - came roaring back then. The country had almost forgotten when it felt and looked as if Kerry owned Croke Park: when the big theatre on the Jones road was their natural summer stage. Now, as Spillane wheeled away, the recognition fell across the country. You can boot the ascendancy out of the big house but you can’t stop them from being who they are. The old hauteur came flooding back in that instant. Here it was: Dublin v Kerry.

After that minute, 56 ticking into 57, the game takes its place along the all-time September classics. There would be no easy coronation for Dublin. There would be no quit either: the 14 on the field fought like tigers. The analysts would crib that Kerry, with that numerical advantage, didn’t show the killer edge to go on and win it. But still: the stone cold outsiders outscored Dublin 1-4 to 0-2 over a closing stanza that ran into seven unbearable and unbeatable minutes of injury time. Each of those 60 second chapters felt like seasons in their own right.

And as the young Kerry team travelled south on Sunday night after the 1-16 to 1-16 draw, there was one certainty. They will fear nothing or nobody now. This stuff. These days. It’s in their blood.