Keith Duggan: This is not an All-Ireland final tonight – it’s a cult

Dublin and Kerry have us convinced this is a rivalry, but it’s more of a Masonic lodge 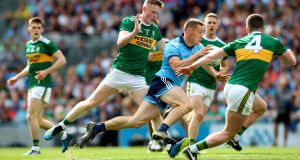 It’s just like Phil Collins warned. We are in too deep. It’s Dublin versus Kerry every day and all the time now. It’s the sky blue and navy versus the green and gold forever. And slowly but surely the nation is turning colour-blind.

It’s city versus country, Heffernan and Dwyer, the Bomber and David Hickey, four-in-a-rows, five-in-a-rows, the stories of the good old days on the lash at Hanlon’s Corner and the nights in Killarney or Ventry, its Philo singing Old Town, it’s a heartfelt chorus of Banna Strand in the Merchant as the barman calls last orders on All-Ireland eve.

It’s Jim Gavin fluttering his eyelashes and telling you about the humility in the group, it’s Peter Keane looking dolefully out at the world when asked about Kerry’s dreams and declaring “I’ve no time to dream”, it’s someone remembering Con Houlihan’s immortal passage on Sheehy versus Cullen and then misquoting it on Up for the Match, it’s Michael O’Hehir and Mícheál Ó Muircheartaigh and those voices, it’s Maurice Fitzgerald forever ambling over to take that sideline ball in Thurles in the sunshine in 2002, it’s Pillar’s Blue Book, it’s the Golden Years video.

It’s the grainy footage of the Dublin defenders all but decapitating Mickey Ned O’Sullivan in the flared and violent 1970s, it’s the black-and-white photographs of the Dublin and Kerry mobs of that era looking impossibly young and modish in their All-Ireland suits, it’s Pat Spillane turning a deeper shade of violet on the Sunday Game after witnessing the latest crop of Kerry darlings take flight, it’s Ciaran Whelan sitting beside him and warning that Dublin – this Dublin – are a different animal. Be clear. This is not an All-Ireland football championship final you are watching this evening.

The wishing for this All-Ireland final began sometime in January. The talking about it began in May and the build-up to the actual match started several weeks before Boris Johnson became prime minister of the UK. The match itself may be over some time around 8pm this evening but it has become glaringly obvious that Dublin versus Kerry will never end. In fact, rumours are circulating among the more conspiracy-prone towns of Mayo that the GAA is right now masterminding a championship calendar that will guarantee Dublin versus Kerry on All-Ireland final day – always and forever more.

It already feels like that. The world is going to hell in a handcart but the only talk in greater Phibsborough is of whether Bernard will be back in the squad for this evening. There’ll be no beef on the supermarket shelves in Tralee by teatime tonight, but as long as Tommy gets a start, sure we’ll be fine.

People of the world

Across the Kingdom they consider it a point of pride to keep abreast of world events, and of course they are worried about prorogation, about the return of a hard border, about the menace that Donald Trump presents to world order and about the bleak warnings of catastrophic climate change. Of course they care about that. But still: they are living in the age of David Clifford. And Seanie Shea might be even better than was previously suspected. You can’t have everything.

The Ireland rugby team departed for the Rugby World Cup in Japan with barely a peep out of them but Ireland’s bond rating took a hit from Moody’s and street protests erupted in the capital when news broke that Joe Brolly, the GAA’s enfant terrible, would not be beamed live and bespectacled into your living rooms to give his views on Dublin versus Kerry: Chapter 888.

Meanwhile, Jim Gavin is saying nothing.

Half of Kerry lives in Dublin. Most of Dublin decamps to Kerry for the summer holidays. They bump into each other in places such as Sneem and Derrynane and tell each other how much they love the other’s county. Dublin and Kerry have the rest of us convinced that this thing is a rivalry. But it’s more of a Masonic Lodge – if such lodges served copious pints of creamy stout and permitted vintage Johnny Crowley jerseys.

For decades the country has gone to the polls to vote in the naive belief that it was electing either Fianna Fáil or Fine Gael while all the time, the Dublin and Kerry legends from the 1970s have secretly run the whole bloody show from behind the scenes. The football match is just the front-of-house stuff: the theatre. All the silky skills, the city bluster and country cuteness keep the rest of the country hypnotised.

Kerry and Dublin have won 65 All-Irelands between them. They’ve lost a further 35, often to the other crowd. According to the last census, they’ve had just over 8,000 pundits on the Sunday Game. One or other of the counties has shown up for 100 All-Ireland finals. They do this stuff in their sleep. Like Romeo and Juliet, or Sid and Nancy, they’re a pair. They’re locked together for all of time.

Either way something seismic is going to happen tonight. In the world of the GAA, the five-in-a-row feat holds the same omnipotent fears and fascination as the Y2K bug did for the tech geeks of the world. Nobody is fully sure what will happen if it actually comes to pass.

It will be no great surprise to discover, if Stephen Cluxton raises the Sam Maguire for the fifth successive year, that Carrauntoohil has just split in two with volcanic ash streaming out before Clucko has even got round to thanking the physio and the guy who delivered the meals – and that the Kerry county board have quickly released a statement confirming that all junior league fixtures would go ahead as planned; that an old bit of a volcano wouldn’t have stopped Aeroplane O’Shea.

This has been a strange year for the Kerry football devotees, who have grimaced and worried their way through a year when they’ve publicly acknowledged that the Dubs look unstoppable while privately whispering that maybe, just maybe, 2019 could be the sweetest Sam of them all.

Whatever you say, Jim Gavin counselled.

But if the hour is late enough and the need is strong enough, then Kerry folks might admit to you, in a whisper, that the pain of losing the five-in-a-row in 1982 would nearly be worth it – just to see the Dublin suffering the same fate. For what could bring Dublin and Kerry closer together than sharing the permanent pain of coming within minutes of GAA immortality?

The rest of us, those other 30 counties, have no real clue what it’s like to keep on winning, month after month, year after year: winning as economies fail and movie stars come and go and children grow up and marriages and graduations and all of life happens. And the county boys keep winning. Until one terrible day, they don’t.

Only Dublin could understand the deep pain within the Kerry psyche: only they could truly appreciate the complex emotions that accompany unending brilliance. So what could be more perfect, for Kerry, than to wipe the slate clean with both counties stopped in their year of five-in-a-row-chasing splendour?

What would be better than to set the rivalry up for a brand new era – the first to five wins it – and the future bright with the prospect of more Dublin versus Kerry, forever and ever, Amen.