Still no stopping Dublin who now have five in their sights 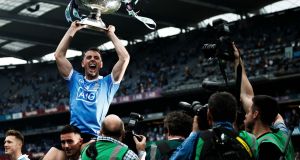 Dublin’s Cormac Costello celebrates after their victory over Tyrone to win the All-Ireland SFC for the fourth time in a row. Photo: Tommy Dickson/Inpho

History came calling for Dublin in Croke Park on Sunday with a fourth successive All-Ireland title, the county’s 28th. Tyrone made their contribution to the final with a blazing first quarter that left Dublin looking shaken and uncertain but the champions recovered with a blitz of 1-3 in three minutes and thereafter the contest was on the run from the Ulster men.

So Dublin join the two Kerry teams of 1929-’32 and 1978-’81 as well as with eerie symmetry their Wexford predecessors of exactly a century ago in 1915-18 as joint holders of the most successful sequence in football. There will be much speculation in the year ahead about the possibility of a fabled fifth, the Holy Grail of Gaelic games for a century and a quarter.

A late penalty, well tucked away by Peter Harte, in the 67th minute – with seven minutes’ injury-time left 10 minutes on the clock – was followed by a Lee Brennan free to halve the eight-point deficit but Tyrone were unable to find the composure to put a full press on and in the time remaining, Dublin actually hit three of the last four scores.

So we got to the expected destination by a slightly unexpected route.

Once Dublin had made the necessary corrections they never looked to be under serious pressure. The first adjustment came when Cian O’Sullivan had to be replaced in the 27th minute, his gamble on the hamstring injury picked up against Galway in the semi-final not coming off.

In fact Dublin’s defensive co-ordinator had looked in difficulty from the start, not moving with the customary fluency and getting drawn into some man-marking chases that were clearly a strain.

In the end Jim Gavin’s team got accomplished performances from their top players whereas Tyrone’s were ultimately subdued.

A year after his last final was aborted by a cruciate injury, Jack McCaffrey’s pace and intelligent defending made a big impact; Brian Fenton emerged as a key influence, in the second half particularly – kicking two languid points, the type where he give the ball just enough money to clear the bar – and commanding the centrefield area.

Con O’Callaghan didn’t replicate his wonder goals from last year’s semi-final and final but he was energetic and excellent in his use of the ball, posing a constant threat. Overall though, Ciarán Kilkenny ran the show for Dublin. Starting on the inside line he – like the rest of the team – took his time to get into the contest but once there he took over.

Curiously he had never previously scored in a senior All-Ireland final but he ended his fifth as Dublin’s joint-top scorer from play, with three points. He also seized the baton to conduct the attack, at one stage amusingly appearing to punish Philly McMahon for a loose attempt at a shot when other options were available by not passing him the ball, rather like a librarian refusing a loan to someone who had previously damaged a book.

From Tyrone’s perspective their main influencers were well restrained after the encouraging start. John Small kept Harte scoreless from play and in a further echo of the counties’ quarter-final meeting in Omagh, Eoin Murchan did the same on Niall Sludden.

They had their successes in that Pádraig Hampsey did well on Mannion, who scored just one from play – to go with another of his file of defensive interventions against Tyrone when he materialised in front of his own goal in the 25th minute to clear a ball initially blocked by the excellent Jonny Cooper.

All of this had appeared a distance away in the opening quarter. Dublin started poorly with Dean Rock missing two early frees after opening the scoring in the third minute and McCaffrey disappointingly spoiling a fine run by tamely under-hitting his shot.

Tyrone steadied and began to put together lively, energetic attacks. Harte equalised with a free and, after Stephen Cluxton’s kick-out was burgled, Mark Bradley put them ahead. Tiernan McCann, at this stage doing a decent job on Kilkenny, kicked a third and Connor McAliskey added the fourth and fifth from a free and play and at 0-1 to 0-5, in the 16th minute, the champions were reeling.

Obviously Dublin’s revival overturned the early advantage but Tyrone also should have taken more from their ascendancy. Their shot selection wasn’t always good and the vision to release a better-placed team-mate not always in evidence.

The Dublin comeback started with an ambitious kick-out by Cluxton – whose two wobbles in the eighth and ninth minute proved the only re-starts he lost out of 31 – which just about reached McCaffrey on a run that torpedoed in on goal and culminated in Kilkenny’s point.

Tyrone goalkeeper Niall Morgan had been accurate enough up until then but Kilkenny picked off the restart and the move ended in a penalty when Paul Mannion was deemed to have been brought down in a borderline but justifiable call and Mannion himself delivered a textbook conversion high to Morgan’s left.

Another two points followed in deadly staccato from Dean Rock, atoning for his dead-ball woes with sharp finishing in play. It was now 1-4 to 0-5 and Tyrone never even regained parity. The next hammer blow came when O’Callaghan ingeniously opened up a passage on goal, was fouled but got the ball away for Niall Scully to palm into the net.

Tyrone were stunned by the reversal in fortune and trailed by seven at the break, 2-7 to 0-6.

In the second half they tried a few things, going man-to-man and late on, shifting Colm Cavanagh – lucky not to get black-carded for a first-half foul on O’Callaghan – into full forward. They then promptly forgot about him until a long ball led to the late penalty after he was fouled by McMahon, just as had happened in injury-time in last year’s semi-final except, on that occasion, Cluxton saved.

Dublin simply kept them at arm’s length, clipping scores periodically and never looking likely to concede a goal until the late penalty. Kieran McGeary received a black card in the 47th minute and Dublin’s John Small saw red in injury-time for a second yellow but it wasn’t a particularly fractious match.

The champions never looked liable to cracking in the fraught closing minutes with points from replacements Kevin McManamon and Michael Darragh Macauley keeping them on course for a six-point win, their biggest in an All-Ireland final for 41 years.