How the Dubs won Sam: Paul Mannion’s penalty swings it 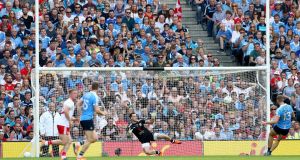 With Tyrone 0-5 to 0-2 ahead and keeping tabs on Dublin’s key men, the champions looked in a bit of bother before Conor Lane awarded them a crucial penalty. From thereon in Tyrone failed to regain the lead. In the first 20 minutes Ciaran Kilkenny had seen very little ball, marked tightly by Tiernan McCann. Niall Morgan’s kickouts had been precise, and with Dublin going man for man he was finding the spaces in behind the press. But in an instant Dublin went zonal, Con O'Callaghan intercepted a poorly executed restart, popped it to Kilkenny who found Mannion and within seconds the entire momentum of the encounter had swung. Mannion had missed a poor spot kick against Laois - but on the biggest stage of all he dusted himself off and buried the ball into the top right corner. The same man would go on to make two key tackles in his own fullback line and kick a superb point. Kilkenny would go on to have 28 possessions and score 0-3. Both despite the best efforts of their man markers McCann and Padraig Hampsey who competed valiantly throughout.

Tyrone had taken a 0-5 to 0-1 lead in the opening half and looked well on their way to starting the second half in similar fashion with two points inside two minutes, before Brian Fenton halted any such notions with a point for Jim Gavin’s team. It was a key score in many regards. Mickey Harte had clearly identified Dublin’s go-to men for this All-Ireland final, and none more so than Fenton, Dublin’s main midfielder. Tyrone had given a man marking role to late replacement Conor Meyler, while Colm Cavanagh picked up Fenton under the Dublin kickouts. Meyler spent most of the match pulling out of the midfielder, although he failed to get the anticipated reaction against his physically imposing opponent. Fenton’s influence grew and grew, and by this point early in the second half he had identified the handover of marking duties between Meyler and Cavanagh, after kickouts, as a time to push on. And that’s exactly what he did to get free for this score. Meyler was replaced shortly afterwards. Fenton went on to have three different markers as he scored two points and constantly created space for others.

In the 47th minute Tyrone substitute Lee Brennan collected a crossfield ball in space coming out from the scoring zone. He took it on the run and with nothing else in his head struck the ball short and wide of the posts. This was indicative of Tyrone’s attacking play. They had 16 wides overall to Dublin’s six. They took on 13 shots from outside of the scoring zone, some from well outside of it, and they scored only one. Even when 0-5 to 0-1 in front they still could have been further ahead, and when they needed cool heads to work their way back into the game they were equally rash.

As the clock ticked into added time John Small caught Peter Harte with a high tackle from behind - earning him his second yellow card, and a second dismissal in his last two All-Ireland finals. Seven minutes of injury time were announced as the lead was cut to four, and the Tyrone fans found their voice. From the following kickout Brian Fenton hit the wing and collected a kickout. He played a quality ball and Kevin McManamon ended the move with a very important score. This was the biggest challenge Tyrone had presented since the opening 20 minutes and Dublin quashed it instantly.

Young and the old

Tyrone managed a goal (via a penalty) and a point via the first two balls into emergency full forward Colm Cavanagh. They finally kicked in another late in injury-time, only for young Brian Howard to provide one of the finest pieces of skill in the encounter. Executing a perfectly timed catch, coming down and starting a counter attack.

Hero of the Munich air disaster Harry Gregg dies aged 87 07:42
Wins for Wexford, Cork and Clare; Ireland to name updated squad for England trip 07:20
Dublin overcome the elements and Carlow 06:00
Tipping Point: Eddie Jones’s rhetoric is out of place in a febrile political climate 06:00
Leinster let their feet do the talking as they make it 17 wins on the trot 06:00
Crossword Get access to over 6,000 interactive crosswords