In amateur sport no one is unbeatable, not even the great Dublin 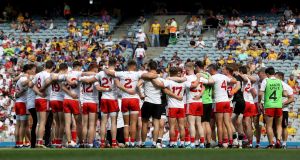 Mickey Harte is exactly the man to work out a plan to beat Dublin. Photo: Bryan Keane/Inpho

Should they even bother playing the All-Ireland final?

Nobody is giving Tyrone a prayer. In all the chatter about this year’s football showpiece; all the podcasts and the sponsored road shows and the previews – nobody has been able to bring themselves to safely forecast anything other but a fourth successive All-Ireland title for Dublin. There is a weird, resigned acceptance about the result before the match has even been played.

Dublin have been so reliably excellent at playing Gaelic football all summer that there is, bizarrely, almost nothing left to say about them. So on the airwaves, the usual tributes to Dublin are dutifully recited week in and week out.

So everyone keeps saying that Dublin don’t ‘do’ panic; that they stick to the process; that they will play it any way it lays. The big conundrum – to sit tight or press up – gets a due airing before the pundits, with a mirthless laugh, conclude that you are screwed either way.

Ciarán Kilkenny’s possession statistics will draw whistles of admiration and Stephen Cluxton’s kick-outs and Jim Gavin’s forensic attention to detail and, of-course, the heavily-decorated bench; the cast of reserves that are the envy of every county in Ireland.

This has been ‘The Conversation’ about Dublin ever since 2014 and it has hardened into a fact that, in a strange way, has given the other elite teams a bit of a get-out-of-jail card. If the Dubs are unbeatable, then maybe it’s okay if we don’t beat them.

On the day that Dublin played Donegal in Croke Park, Lee Keegan and Tomás Ó Sé were in studio. Both men are two of the most exciting footballers to have ever played the game and shared, in championship games, a dauntlessness of spirit. Along with Joe Brolly, they were discussing the seeming impossibility of beating the Dubs. Brolly made that point about the Dubs: that they don’t panic.

“It doesn’t matter what you are doing at the time,” Keegan agreed.

“It is just the next play. You just look at them and they are not rattled. And I couldn’t agree more with Tomás. Until they are rattled...”

You can bet that Keegan hopes and even expects to be playing and beating Dublin in a future All-Ireland final. So he wasn’t going to say anything apart from vaguely praiseworthy stuff about Dublin.

But I don’t believe that Lee Keegan privately believes that it is impossible to “rattle” Dublin. Keegan is among the top five Gaelic footballers in the country. He knows that every player occasionally becomes rattled – that catch-all GAA phrase for being in some way surprised or thrown off your game or finding doubts, old or fresh, creeping into your mind.

Keegan knows this happens because players are human. And he can’t say this publicly while he is still playing for Mayo but you can bet that deep down, he believes in his gut that Mayo have taken Dublin to that place a few times. And they didn’t take advantage of it.

You can bet that when Mayo’s players discuss the reasons they didn’t defeat Dublin in the All-Ireland finals, they aren’t marvelling at the Dub’s poise under pressure. They were talking about the ways in which they themselves screwed up; the small things they didn’t do that made the infinite difference.

In the sixth minute of the Donegal game this summer, Jack McCaffrey looked up and played an attempted kick pass over Donegal’s corner back. His team-mate, Niall Scully had waited until his marker was ball watching and then he cut back-door behind the last line of defence.

McCaffrey’s pass was cut out on that occasion but the public would get a chance to see the same cut from Scully early in the second half in a move which led to his second goal. And they would see the very same move which led to a goal in the All-Ireland semi-final against Galway.

It’s just one in a series of patterns – almost set plays – which Dublin use, having stolen a march on other teams by exploiting one of the faults most common in all GAA defenders: their lifelong habit of ball-watching.

Scully’s goals killed Donegal that day and his speed and the angle of his runs were exemplary. But the first was facilitated through non-existent defending and the second was down to the basic defensive error of defenders – at least five Donegal men in this instance – becoming hypnotised by the ball. It is a weakness still rampant in the elite tier of Gaelic football and one upon which Dublin thrive.

There is so much to admire about Dublin, not least the humility with which they have ascended towards becoming a great team. But the idea that they are actually unbeatable is bogus. The Dublin players make mistakes. Of course they do: they are humans and, remember, are amateur sports men. They can be forced into hurried thinking. They can be confronted with problems that haven’t been solved for them in the training ground.

They are terrific athletes and footballers and honest and their experiences of the last three years probably makes them believe that they have the resources and the collective strength to always find a way to win.

That has enabled them to, as Colm Cooper reportedly said, “ignore you” on the field: to behave as if nothing their opponents do can trouble or distract them.

But just because they believe they are unbeatable doesn’t make it a divine law. It doesn’t make it fact. It is the failure of all other teams since Donegal in 2014 to expose their human frailties which has given them that veneer of invulnerability.

And right now, this is the beast that Tyrone face.

This is the kind of occasion that is tailor-made for a coach like Mickey Harte. Again: nobody outside the dressing room gives Tyrone a prayer. That gives the coach a license to do whatever he chooses. Harte has a reputation for fearless thinking in huge matches.

What if they put a dedicated, full-on, ball-denial, man marker on Ciarán Kilkenny or James McCarthy for the first 20 minutes, just to see what happens?

What if they really decide to see how Dublin’s fullback line copes with a sustained barrage of long high ball?

But most of all, what if Tyrone convince themselves that the world is wrong and they decide to ignore all the chatter and to play with that mix of iron and madness – true Tyrone eccentricity – that no team this summer has had the courage to bring to Dublin? If they do all that, will they have a chance of winning? Yes. Of course they will.

Not since Donegal ’92 has any team gone in to an All-Ireland final as such stone cold outsiders. This is a shot to nothing for Tyrone. They can do whatever they please and that makes them very, very dangerous.