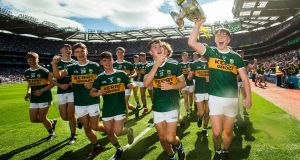 Peter Keane has left the door open for an approach from Kerry officials regarding the senior vacancy after managing their minors to a historic five-in-a-row of All-Ireland titles.

Keane described the Croke Park win as the sweetest of the five after falling seven points behind initially before recovering to win by four.

The holders were dominated at midfield and overrun in defence between the 11th and 26th minutes when they conceded a whopping 1-7 without reply.

But having survived epics against Monaghan and Cork previously in the campaign, the Munster champions came good again and reeled Galway in late on.

The sides were level four times in the second-half and remained deadlocked at 0-16 to 1-13 with 59 minutes on the clock.

Kerry outscored Galway by 0-5 to 0-1 from there with sub Ruaidhri O Beaglaoich to the fore and finishing with three points.

It’s Kerry’s 30th consecutive win in the minor grade having last experienced defeat way back in the quarter-finals of the 2013 campaign against Tyrone.

Keane has been in charge for the last three wins, taking over from Jack O’Connor, who he now appears to be locked in a head to head battle with for the senior job.

“I know no more than you know,” said Keane of potentially succeeding Eamonn Fitzmaurice. “You might say, ‘Ah, he’s only copping out on the question here’ but I genuinely don’t. I made a conscious decision all along to say that I’ve a minor championship to win and the plan was to get over the All-Ireland semi-final and hopefully then get over a final and if that became a question I’d deal with it then. At the end of the day, you have to be asked.”

On the issue of making history as five-in-a-row winners, Keane said it’s an irrelevance as the players are different each season, particularly this year with the age limit reduced to U-17.

Both sides played an exciting, attacking brand of football and the game swung back and forth, Kerry moving 0-4 to 0-1 clear at first.

Then Galway enjoyed their purple patch, striking six points in a row before centre-back Tony Gill poked in the game’s only goal after Daniel Cox’s shot was only blocked into his path.

When Galway eventually lifted the siege, they led by seven points though Kerry finished the half strongly to trail by 1-9 to 0-8 at half-time.

The Kingdom fought back to parity by the 45th minute and the sides were tied on three more occasions before Kerry pulled away at the death for their 16th title at the grade.