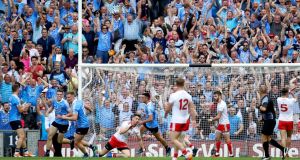 Seamus Darby better dust down those giant-slaying boots. Dublin have completed a fourth successive All-Ireland title with a rampant performance against Tyrone and now the fabled five will become the story of next season.

The Ulster men threw everything at this but finished, like Mayo and Kerry before them, standing in a group watching Dublin celebrate and wondering what can be done about the power, skill and extraordinary will of Jim Gavin’s metropolitan team.

It was a strange, frantic game, this, bracketed by Tyrone surges but dominated, in the main, by Dublin’s composure and athleticism, football skills and relentlessness for the first to 78th minute.

They are a phenomenon and show no sign of slackening. By the time their only perceived vulnerability under the high-ball had been exposed, the day was already won. A long ball into the square drew a rash foul on Colm Cavanagh by Philly McMahon. Peter Harte converted the 69th minute penalty to send a tremor of rebellion and renewed faith around the ground. But the truth was that Dublin had been in control since they quelled the Ulster uprising in the opening quarter.

What a bewildering first half it must have been for Tyrone. A fortnight of plotting and planning and incantations of self-belief in the training centre of excellence up in Garvaghy produced a stunning opening 15 minutes when they tore into the three-times champions with something of the old brilliant disrespect.

For that while, it appeared as if Mickey Harte had concocted yet another September spell as the Ulster team raced into a 0-5 to 0-1 lead after 15 minutes. And Dublin looked ordinary- mortal- during that same period.

Dean Rock struck two wides from frees he ordinarily converts in his sleep. Stephen Cluxton pinged two restarts straight over the sideline. And there were other peculiar sights: James McCarthy taking a ball from the skies and coughing it up under fierce pressure from white shirts. Philly McMahon was given the same treatment minutes later.

In contrast, Tyrone were moving the ball up the field with fast, considered passes. Tiernan McCann’s ninth minute point was emblematic of this golden spell; a lovely, measured ball from Niall Sludden to the dynamic Mark Bradley, a half-swivel and a quick pass to the Killyclogher man, who chipped a score.

Three minutes after that, they moved the ball through the Dublin XV with three passes; a clever pass from Ronan McNamee and a quick transfer from Conor Meyler to Peter Harte, who found himself on his wrong foot. That wide was one of Tyrone’s six during that blistering spell: all of those needed to go over.

Still, at 0-5 to 0-1 after the first quarter, the conviction and composure of Tyrone’s play was enough to cause a few questions and doubts to materialise in the soupy afternoon. What if Dublin were complacent? What if they couldn’t get out of third gear? What if Tyrone and Mickey Harte just have the Indian sign on the aristocracy when it comes to September? For a few moments, this All-Ireland final- the least anticipated football showpiece ever- seemed to be entering the realm of fantasy.

And then Ciaran Kilkenny scored a point. It was nothing flashy; a McCarthy catch at midfield and the Castleknock man finished with economy. But now the Dubs were facing Niall Morgan’s goal and the avenues open to him for the first quarter were closed. He delayed his first kick-out, restarted and tried to find a white shirt with a short restart. Fatally, the ball found its way into Kilkenny’s hands.

Within five minutes, Dublin had hit Tyrone with 1-3. Paul Mannion, taking a heavy tackle as he went to finish that Kilkenny steal, shook himself down and delivered a venomous penalty. Dean Rock flashed two menacing points. Now, Kilkenny, Mannion and Con O’Callaghan were buzzing with adrenaline and a visible certitude- a sense of normal service resumed - had settled over Croke Park, The Hill found its voice.

Dublin suddenly owned the ball. A sublime bit of ball skill by O’Callaghan exposed Tyrone’s last line again: the Cuala man had the strength and poise to absorb a heavy challenge, get back up and float a handpass for Niall Scully to bat into an empty net. The Tyrone men were still sucking oxygen after the intensity of their opening salvo, could only look at the score board and wonder. Already, the pale blue shirts had stretched into the distance, racing towards that fourth All-Ireland.

Tyrone kept chasing but in the second half, the spaces opened up to facilitate the kind of lighting attacks that Kilkenny enjoys and, in the 51st minute, a sumptuous period of keep-ball completed with one of those nonchalant points that have become the trade mark of Brian Fenton.

Dublin had all day on the ball now while at the other end, Tyrone’s attacks were becoming frayed and pressurised and increasingly scarce. And when they needed to, Dublin brought all 15 players inside their own 65. There was no way Tyrone were going to peg Dublin back with points. And the champions didn’t give them a single clear look at goal.

There was nothing much but for the Tyrone crowd -and the country at large- to sit back and marvel at a team for the ages. The old warriors, McManamon and MacAuley came in to add a bit of brio and a couple of insurance points. It was a procession in the end. There was nothing to suggest that they won’t be stronger and more inventive next winter, with the five-in-the-row prize now looming on their horizon. Invincible.