Three bad kick-outs and a stupid free, and Tyrone went from four up to five down in 10 minutes 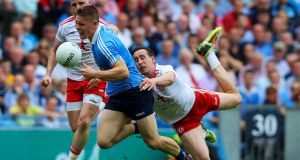 Dublin punish you like a hungover judge throwing out 10-stretches just to get through the morning. They are the ultimate sporting pedants. You can mind your Ps, look after your Qs, dot every i in sight and still all it takes is a slightly uncrossed t and they take a demonic pleasure in correcting you. You swear to yourself you won’t make the same mistake again but they just wait you out because they know you will, whether you like it or not.

After 17 minutes, Tyrone led by 0-5 to 0-1. Save for the odd hasty shot here and there, they hadn’t put a foot wrong. Mark Bradley had scored a point, set up another, got fouled for a free to buy another still. Tiernan McCann had more or less kept Ciarán Kilkenny away from the game, Dean Rock had missed a couple of frees, Dublin had scored a single point from nine shots at goal. It was the sort of opening Tyrone needed but might not have had the temerity to wish for.

In a macro sense – and this is the technical term for what had taken place – Tyrone hadn’t done anything stupid. They had been precise, dogged and pretty much faultless. Even Dublin’s first point from play – a Kilkenny effort on 18 minutes that originated with a kick-out of astonishing accuracy from Stephen Cluxton – was almost cut out at source because of Tyrone’s aggressive press.

“You aim to start every game fast,” said Colm Cavanagh afterwards. “So yeah, that was what we aimed for in the first 20 minutes. But I think we actually were in a wee bit of shock that it had gone that well. The scores were going over, we were kicking the ball in and winning the play. Everything that you dream of starting an All-Ireland final was happening. But maybe, that came with a little bit of a shock. It’s hard to put your finger on it.”

And then, and then. Within 10 minutes, the game was over. Dublin outscored Tyrone by 2-3 to 0-1 between the 18th and 28th minutes. All the mistakes Tyrone weren’t making in the opening quarter suddenly presented themselves, one leading to the next, and the next and the next. It only takes one errant block to knock over a Jenga tower.

Niall Morgan’s kick-outs were working right up until the point when they weren’t. From Kilkenny’s point, he put down the ball and tried to ping another out to the right sideline but miskicked it straight into the retreating Kilkenny’s bread basket. Just like that, Dublin had their opening – Kilkenny to Con O’Callaghan to Paul Mannion.

Mattie Donnelly and Tiernan McCann converged on the forward and whether you call it a foul or not, Conor Lane decided it was. Mannion didn’t ask any questions, just nailed the peno. Everything good Tyrone had done was vaporised because of one bad kick-out.

This is what the Dubs do. They are divining rods for errors and weaknesses. Masters of taking a mile from the given inch. Morgan had been having good day of it and now, all of a sudden, he was the loneliest man in Dublin.

Trying to get a kick-out away in that atmosphere must have been like attempting to split the 18th fairway at Augusta while they’re launching a rocket from the 17th green. Dublin monstered the next two kick-outs, both of them leading to points by Dean Rock. From being 0-5 to 0-1 ahead, Tyrone were now 1-4 to 0-5 behind.

And though they managed to get up the other end of the pitch eventually, Dublin were piling in now. If this was an argument, it was one in which Dublin were no longer allowing Tyrone to finish a sentence. They were pouncing on every “um” and “ah” and “er” and twisting the discussion their way. Tyrone simply couldn’t get their thoughts together.

“Once we made a mistake up front, any time we gave the ball away, their transition is so quick,” said Cavanagh. “Even for myself, trying to get back into that hole, they had the ball right beside me by the time I got back and turned around. They’re so shocking fast. We found it hard to get set up and get things organised. You don’t have the time that you would against other teams to get organised. We have to stand up and say, ‘Look, yes, we had a good first 20 minutes but from then on, Dublin took over.’

“Probably the hardest thing to take is that we were taking shots on from angles we shouldn’t have been doing, we were taking the wrong choices. If we had kept playing Dublin at their own game, keeping the ball properly and making them come out at us, we could have been in such a better position. But it’s hard to get that message about when the place is rocking and things are going against you. It’s very hard to get the message around to be smart.”

And so it played out. On 28 minutes, Jonny Cooper went loping over to a loose ball on the Hogan Stand sideline, only hoping and praying that a Tyrone player would barge into his back and give him a free. Conor Myler obliged and while the Tyrone players looked around at Lane in protest, Cooper played a quick one down the line and Dublin were away. Con O’Callaghan threw an outrageous dummy to wriggle into the box before putting Niall Scully away for an open goal.

So that was that. Three bad kick-outs and a stupid free. Four up to five down in 10 minutes.

Dublin don’t need any more than that to ruin your day.

1 Monica Seles: The warrior queen who could have been the best ever
2 Thrillingly fluent, thrillingly pointless: Man City’s riposte comes too late
3 Whole New Ball Game: Rugby players could test public support over pay cuts
4 The Best of Times: Ireland’s Golden Generation make Grand Slam history in 2009
5 Martina Navratilova: A leader in her time, and for ours
Real news has value SUBSCRIBE