Kingdom lads will need all their resilience to overcome impressive Galway 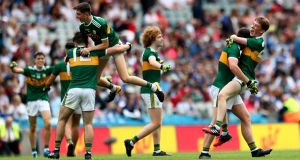 It’s not entirely fair or reasonable to label this as Kerry’s chance to make history and win a record fifth All-Ireland title in succession – unprecedented at either minor or senior grade, football or hurling.

Most of the 2018 crop of players were still in primary school when the Kerry minors of 2014 began the winning streak, and it’s been a largely different team in each of the four years since.

Given the drop in the minor age bracket this year, from under-18 to under-17, Kerry minor manager Peter Keane has also had to fast-track the underage talent in the county, only with plenty of their winning trademarks of the last four years – including Paul O’Shea, a first cousin of last year’s standout minor David Clifford.

In ways there’s no avoiding it either. A Kerry football team were the last to stand on the verge of a similar five-in-a-row on the senior football stage, before Séamus Darby and Offaly broke their hearts in the 1982 All-Ireland final, and now Galway stand in the way of a minor five-in-a-row in Croke Park on Sunday. History again beckons whether wanted or not.

The Kilkenny senior hurlers also stared such history in the face, before Tipperary ended their five-in-a-row hopes in the 2010 All-Ireland final. A worthy nod here to the Kerry women’s football team, who won nine All-Irelands in succession in the 1980s, but no one involved in this Kerry minor camp is getting caught up in the backdrop to it.

Kerry have already set a record, winning 29 consecutive championship games at minor level, unbeaten now since their All-Ireland quarter-final defeat to Tyrone in 2013; a reminder how little that counts came as recently as the semi-final and dangerously close escape against Monaghan, 1-16 to 2-11, Kerry scoring the last three points of the game to ensure their narrow passage.

It’s notable too that before going on this winning streak, in 2014, Kerry hadn’t won an All-Ireland minor football title in 20 years, former senior All-Ireland winning manager Jack O’Connor guiding back to the top in 2014, and again in 2015, before Keane took over in 2016.

Indeed no team had ever won four-in-a-row All-Ireland minor titles until last year, when Kerry took apart Derry in the 2017 final, 6-17 to 1-8, Clifford showing them the way, scoring an incredible 8-41 in six games.

Galway however come suitably armed to end Kerry’s hopes and dreams, having come through Connacht unbeaten, and since taking out Clare and then Leinster champions Meath, 3-13 to 2-9, arguably the more impressive of the All-Ireland semi-finals.

Manager Donal Ó Fatharta’s team have been showing their ability all summer, not least in midfielder Paul Kelly, also an Irish U-18 basketball international. They also lost the 2016 minor final to Kerry.

Kerry have been showing ability too. Level going into injury time in their semi-final, Monaghan moved ahead for the very first time when Donnacha Swinburne pointed, only for Kerry, reduced to 14 men, to rise again – two points from Paul Walsh, from frees, and the late insurance point from substitute Jack Kennelly.

Keane later praised the “guts, heart and resilience” of his team, especially given the lower age grade. They’ll need all of that to win here, and recent history suggests they may just have enough.

Nicky English: Task for Waterford and Galway made harder by third week syndrome 08:30
Maradooo! A preternaturally gifted artist and a rebel outsider 07:00
Ireland’s clash against Georgia will be an important audition 06:27
George Ford and England wary of possible Welsh backlash 06:00
Ian O’Riordan: Debate on return of competitive running starts fast and stays hot 06:00
Crossword Get access to over 6,000 interactive crosswords