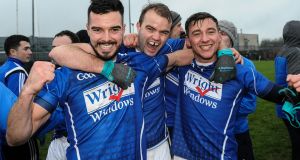 The two-time Meath champions got off to a great start with a converted free by Pádraig McKeever and a belatedly awarded point from play by Nathan O’Brien with less than four minutes elapsed. An 11th-minute goal from close range by Mark McCabe preceded another brace of points, leaving the visitors seven points clear at the quarter-hour mark.

St Loman’s marquee player, John Heslin, was operating further out the field than usual but points from inside forwards Ken Casey and Shane Dempsey, and a free each by Paul Sharry and Heslin, brought the Mullingar men back into contention. The sides equally shared four points before the break, leaving Simonstown ahead by 1-6 to 0-6 at the interval.

The wind that was favouring St Loman’s after the change of ends seemed to pick up, and with it at their backs they took control in most sectors. Centre half back Paddy Dowdall was always prominent and two great frees by Heslin, and a point via the crossbar by Dempsey had them on level terms by the 43rd minute. Then impressive substitute Conradh Reilly nudged them ahead for the first time with a sublime point in the 48th minute.

Sharry (play) and Heslin (a free) stretched their lead, but Simonstown pounced for their only two points of the second half via a quickfire brace from the manager’s son Shane O’Rourke and a great team score finished by Conor Sheridan. Another influential St Loman’s substitute, Kieran Lynam, doubled his side’s advantage with a fisted point in the 56th minute, and resolute defending enabled the Mullingar outfit to hang on for a deserved win.

Luke Dempsey, who guided Westmeath to unprecedented minor and under 21 All-Ireland successes in 1995 and 1999 respectively, prior to a relatively successful spell at senior level, will now have to mastermind what would be only the Lake County’s second senior club provincial title on December 10th when St Loman’s take on Moorefield, whom he guided to back-to-back Kildare county titles in 2013 and 2014.