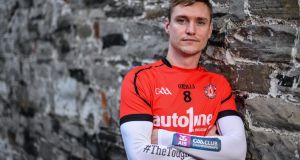 Caolan Mooney: the Rostrevor man returned from a three-year stint with Collingwood in late 2014 but found the transition back to football initially troublesome. Photograph: Sam Barnes/Sportsfile

Caolan Mooney could be forgiven for cursing fellow Down man Marty Clarke, his one-time Australian Rules colleague at Collingwood.

It was Clarke’s remarkable form in 2010, after returning from his first AFL stint, that propelled Down to the All-Ireland final that year and which, four years on, heaped pressure on Mooney to have a similar impact.

The Rostrevor man, now 24, returned from a three-year stint with Collingwood in late 2014 but found the transition initially troublesome. He came back, as it happened, along with Clarke who was this time returning to Ireland for good after a second spell Down Under.

Health issues prevented Clarke from resuming his Down career though the hope was that Mooney, who featured six times for Collingwood, would have an immediate impact in the amateur game.

Three years on, and preparing for an AIB Ulster club intermediate final with Rostrevor this weekend, Mooney is now in a position to reveal exactly how difficult the code change was.

“I wasn’t ready at all,” he admitted. “When I came back I was 93kg. I was playing this year at 84kg. It took me a couple of years to shed a bit of weight and that extra weight I was carrying didn’t help my hamstrings.

“Last year, getting away from Down really gave me that buzz to want to come back in so I really tried hard to get into the shape of my life.”

The period away from the Down panel that Mooney alludes to occurred after he informed the management early in the year that he was opting off the panel. He would later admit it was a ‘rash decision’ which he regretted and he duly returned for 2017, playing his part in Down’s unlikely run to the Ulster final.

The decision to leave Australia he doesn’t regret, not for a minute.

“I had another year left on my contract but I walked away from it,” he said.

“I just didn’t want to play for them anymore. I thought I was missing stuff at home and I decided it was time for me to go. If I had been playing more football over there at senior level it might have changed my mind.”

Kevin Feely, the current Kildare midfielder, walked out on a professional soccer career in similar circumstances and noted that some players in the UK were only in it for the money.

In Mooney’s scenario, he could have hung around for another season at least in Australia and perhaps even held out for improved terms.

While away from the Down panel, Mooney spent the summer of 2016 in New York and won a senior football championship there with the Monaghan club. It only hardened his resolve to return and to play for his county.

It was a decent 2017 season, both for Mooney and Down, though he’s confident it can be even better in 2018.

“I think we’re good enough to push for Division One this year,” he said. “Last season, we tried a system that we weren’t used to. For a part of the year it worked but against Tyrone we got exploited because Tyrone are just that bit further down the line.

“At half-time against Monaghan, in the final round of the qualifiers, we were a bit disappointed that it was a draw because we thought we had dominated that game but Monaghan’s strength in depth showed in the second half.

“They made a few changes and we couldn’t handle it so I think we need to start strengthening our squad and our options from the bench.”

Clarke, meanwhile, still just 30, has made a move into coaching with a role in the backroom team of the Cavan U-20s. Kevin Downes will manage the team in what will be the first year of the new competition.