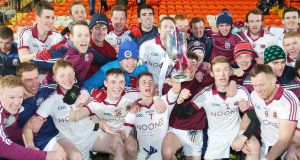 Slaughtneil celebrate with the trophy after retaining their Ulster title. Photograph: Jonathan Porter/Inpho

So that long wait continues. No Cavan club has won an Ulster senior football title, and 40 years after contesting their last final, Cavan Gaels very soon found themselves bowing to the absolute superiority of Slaughtneil.

Because with that also continues the extraordinary run from the small townland club from the middle of Derry’s nowhere. Last year’s beaten All-Ireland club finalists have bounced right back to win a third Ulster football title in four years, having only won a first Derry club title in 2004.

More impressive perhaps is Slaughtneil’s brand and ethic of football: high in tempo and efficiency, low in error, they finished with six different scorers over the hour and a bit, including Chrissy McKaigue - their indefatigable dual player who repeatedly shifted through the gears from centre back to either set up or nail down a point.

Shane McGuigan shot 1-6, while the physicality of Patsy Bradley at midfield was central to many an attacking move, each one neatly delivered, carefully index carded.

If there’s a club playing a better brand of football anywhere in the country then Slaughtneil wouldn’t mind playing them right now. Cavan Gaels did rally a little in the second half, but were soon bowing again to the small Derry club which has now also completed a second Ulster treble - Slaughtneil also defending their provincial hurling and camogie titles this season.

Not just the most successful club in Derry right now; no other club in the country has ever enjoyed such luminous times.

Even if essentially one-sided it still provided ample entertainment for the 7,591 in attendance - who earlier saw Sean Cavanagh’s Moy win the Intermediate title.

Cavan Gaels lost that 1977 showdown to St John’s of Antrim, but never got within hearing distance of this. Slaughtneil were up 0-7 to 0-4 at the break, that margin could have been doubled - Chris Bradley and Se McGuigan both narrowly missing goal chances early on.

That inevitable goal came seven minutes into the second half, Brendan Rogers starting the move from the full back line, with McGuigan duly finishing.

And so another stripe on the arm of veteran manager Mickey Moran from Derry, who at this rate must fancy his chances of a return trip to Croke Park on St Patrick’s Day to make amends for last year.

Subs: D Meehan for (half time).