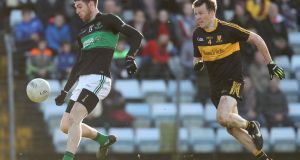 Nemo Rangers’ Luke Connolly was the stand out performer in their win over Dr Crokes. Photograph: Luke Quinn/Inpho

Nemo Rangers stripped Dr Croke’s of their Munster and All-Ireland club titles with a convincing win to register their 16th provincial success at Pairc Ui Rinn on Sunday.

A crowd of 2,851 witnessed a commanding display from the Cork champions, whose margin of victory would have been much greater but for a succession of missed goal-scoring chances and some magnificent Croke’s defending.

Luke Connolly was the star of Nemo’s glorious performance, scoring a game-high 10 points and interrupting Croke’s fight-back entering the closing quarter, when they cut the lead to 0-11 to 0-9.

At that point Nemo steadied once again with Paul Kerrigan and Connolly contributing three points in a 90-second burst which finally ended the Kerry club’s challenge.

Crokes were reduced to 14 men in the 52nd minute, when Kieran O’Leary was sent off for a second yellow card and Nemo’s only cause for concern came on the hour.

A towering ball was gathered by substitute Eoin Brosnan, whose shot was well saved by ‘keeper Michael Aodh Martin and that was the end of Croke’s reign as dual champions.

How Nemo weren’t much further ahead at the interval was due to a combination of last-gasp blocks by defenders and a couple of brilliant saves from goalkeeper Shane Murphy.

Nemo’s pace regularly opened up a porous Croke’s defence with the alarm bells sounding as early as the fifth minute, when Barry O’Driscoll’s shot was deflected out for a ‘45 by corner back John Payne.

He repeated the trick to deny Paul Kerrigan for another ‘45, which Connolly converted to level matters at 0-3 apiece after 10 minutes.

That score triggered a run of six unanswered points from the Cork champions, who surged 0-8 to 0-3 ahead by the 19th minute with captain Aidan O’Reilly popping up from full-back to land an important score.

Connolly completed the set by nailing a second ‘45 following another penetrating run through the heart of the Croke’s defence, on this occasion by midfielder Alan O’Donovan.

It could have been worse for the Killarney side but Murphy dived acrobatically to his left to divert a stinging Connolly volley away for a ‘45, which hit the upright.

And five minutes from the break, Connolly was again left frustrated as his goal-bound attempt was parried by Murphy.

Croke’s regained some level of composure to end their 15-minute barren spell with a Colm Cooper free before Brian Looney added another to reduce the lead to three points.

Connolly completed the first-half scoring by converting a late free to leave the All-Ireland champions 0-9 to 0-5 adrift and fortunate to be just that.

The pattern continued on the resumption with Gumley stretching Nemo’s lead with a point inside 10 seconds and they swept six clear with a Connolly free moments later.

Johnny Buckley inspired a mini Croke’s revival with a powerful spell at midfield and their supporters were at last heard as Croke’s hit four points without response.

Looney kick-started the set after 34 minutes with a couple more from Casey and Cooper from a free to cut the deficit to 0-11 to 0-9 after 41 minutes. But, Nemo re-grouped again to run out worthy winners, defying the bookies 5/2 odds.