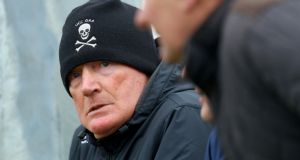 Billy Morgan: synonymous with the rise of Nemo Rangers as a football power. Photograph: James Crombie/Inpho

Sunday’s Munster club football final has a familiar ring as another Cork-Kerry contest between Nemo Rangers and Dr Crokes but the rivalry at county level has tended to be more subdued amongst the clubs.

Teams from the counties have met only15 times since the first, unofficial championship in 1965. Surprisingly, it’s Kerry clubs that have the advantage given that overall, the county has just 15 provincial club titles compared to 26 for Cork and the disparity at All-Ireland level is even starker, 11 titles to five.

Yet for all that Kerry clubs have won more finals against Cork opposition than vice versa, eight against seven.

With long gaps between Kerry successes there hasn’t really been a serious rivalry amongst the clubs of the two counties since Austin Stacks and Nemo played each other several times in the 1970s.

Although the Tralee club never managed to win any of these, they were close-run affairs with two replays required in 1975 and another three years later.

Stacks did emerge in 1976 and went on to win the All-Ireland in 1977 in what was their only national success – an underachievement for a team with five players from Mick O’Dwyer’s great Kerry team.

“Club football in Cork in those days was excellent,” according to Tony O’Keeffe, former county secretary in Kerry and a member of that Stacks team.

“Nemo and the Barrs [St Finbarrs] were very strong and you had a much higher standard. Maybe in the last 10 or 15 years things haven’t been as good there.

“Kerry were winning eight Munsters in a row and beating Cork in the finals and there were always a good few Nemo players on those teams and I think that drove them on when playing Stacks. It was a terrific rivalry but we never beat them.”

Billy Morgan, who captained or managed Cork to three All-Irelands, was a major influence on the Nemo team of that era, which laid the foundation for a club tradition that still sees them top of the All-Ireland roll of honour despite not having won the Merrigan Cup in 14 years.

They also lead the provincial champions’ list, ahead of Crokes, but the Killarney club are current All-Ireland champions and favourites on Sunday.

“Crokes are hugely organised,” said O’Keeffe, “and great credit to Pat O’Shea, who’s an outstanding coach. They’re highly organised both at juvenile and adult level and have some great young players but the fact that Nemo are underdogs will drive them as well. But I think Crokes will win.”