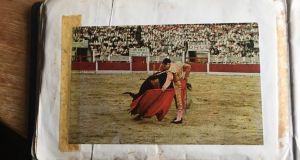 The front of a postcard from Phil Stuart. Photograph: Malachy Clerkin

The autograph book on Tony Daly’s kitchen table is small and thick and rectangular and there’s the give of a medium-cooked steak in it when you press down on the years contained within. It was bought in an O’Brien’s of Sligo, some time in probably 1960.

Scrawled along the top of the first inside page is the claim of ownership, an important declaration when you’re 12: “Anthony, Eamon + Judy.” Eamon is Tony’s twin brother. Judy was the cat.

Turn the page and an unmistakable set jaw and hooded eyeline stares back. The headshot is affixed to a small 2x4-inch piece of card and the sticky tape holding it to the page has been yellowed and loosed by the decades. The blue ink underneath is smudged a little here and there but the flourish and style of the signature fairly sings from the page even now.

Fifty-seven years after a 12-year-old boy from Leitrim sent him a stamped addressed envelope out of the blue, Christy Ring’s autograph is clear as the day he replied.

Daly is a retired schoolteacher these days, living just in off the seafront on the Howth Road in Dublin. But he began his days in a GAA-mad household in Convent Avenue, Drumshambo, Co Leitrim. His father brought him and Eamon to games everywhere, within the county and without. Bewitched by it all, they hit on the wheeze of writing to some of the names they saw in the paper and heard on the radio to see would they write back.

“What we used to do was write a letter to, say, Kevin Heffernan saying how great we thought he was. At the time, it was all radio and photographs in the paper. We never actually saw most of these men playing.

“So what we did was get a little plain postcard, cut a photograph out of a newspaper and paste it onto the postcard. Write the little letter and put a stamped addressed envelope along with it and then send it off to the secretary of Dublin GAA or whatever else. So, Kevin Heffernan, c/o The County Secretary, Dublin GAA. We wouldn’t know any addresses – there wasn’t even phonebooks at the time. A stamp at that time was four pence.

“We’d be giving them a week, say, and from that point on, we’d be waiting at the bottom of the stairs before going to school, hoping there’d be something in the post for us. That was the excitement of it all for us. Then when we went to boarding school in Cavan, we kept it up at holiday time. So I’d say we did it between the ages of 12 and 14, maybe 15. Basically from about 1960 to 1963. It was a great period for GAA teams.”

Some of them, he never heard from again. Some, like the great Ring, signed the card and posted the envelope back. Some, like Kerry’s Johnny Culloty scribbled a couple of lines on the back. And occasionally, they hit the mother lode and a handwritten letter would come in the post along with their little postcard signed. Heffernan was one of those.

“I write to thank you for your very nice letter and to apologise for not writing long ago. Unfortunately I misplaced your letter among my papers shortly after I received and it and only discovered it recently. I was unable to write in the meantime as I had not memorised your address.

“It is very good to read that you are interested in football and hurling and although you have not said so I am sure you must be a player yourself. Nearly all the Leitrim team are friends of mine and if you follow in the footsteps and example of players like Packie McGarty, Tony Hayden and Cathal Flynn, I’m sure I will one day see you in your county colours in Croke Park.

“But you should remember that to be a first-class player you should practice hard and often, always do your best even when a game goes against you and in particular, always play the game sportingly. 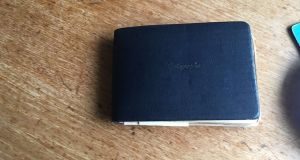 “I am returning your photograph to you and as you seem to be an autograph collector I am enclosing the signatures of some of the Dublin players. In case you cannot read them, they are Johnny Joyce, Ollie Freaney, Paddy Farnon, Paddy O’Flaherty, Mickey Whelan and Cathal O’Leary.

“I thank you again for your letter and wish you many enjoyable hours of football.

Daly went on to teach in Ard Scoil Rís on Griffith Avenue for 40 years after leaving Leitrim and was a social member of St Vincent’s in his time. He came into Heffernan’s orbit here and there along the way and once summoned up the gumption to tell Heffo that he’d written him a letter when he was a kid.

“On one occasion, he was up at the bar and I went over to him and got talking to him. and I said, ‘When I was only a garsún Kevin, you wrote me a letter’. And sure nobody ever really got to know Kevin and if you got a grunt out of him in person you were doing well. So for him to do that, to write me a letter and to go and get the autographs of some of the rest of the Dublin team for me was marvellous.”

The autograph book is a treasure. The purest gold. Hurlers and footballers from all across the country, no age themselves but happy to make a 12-year-old’s day. Tom Cheasty of Waterford, Tony Wall of Tipperary, the great Seán Purcell. Charlie Wren from Offaly sent him a team photo from the 1960 All-Ireland semi-final against Down.

That Down team were his idols, the sun, moon and stars. When they won the 1968 All-Ireland, he was in UCD and made it his business to go to every Down game from the first round of Ulster to the final in Croke Park. That love was born at the start of the decade, fed by correspondence from the gods.

Goalkeeper Eamon McKay sent him a letter thanking him for enclosing a stamp but saying it hadn’t been necessary.

“It is nice to know someone thinks I am the number one goalkeeper in Ireland but maybe others would not think so,” wrote McKay. James and Dan McCartan replied, including a colour photo of the Down team that won their first All-Ireland in 1960.

The immortal Sean O’Neill wrote him a note saying: “You are a man of direct methods and I like that.”

For a 12-year-old in Leitrim in 1962, it was like a compliment landing from the dark side of the moon.

Incredibly, some of them wrote more than once. The great Jimmy Doyle of Tipperary sent him two letters and followed up with a Christmas card. One of the letters was three pages long and from the opening line you get an idea of what a young man he was at the time – still in his early 20s – but also what a luminous star he was already.

“Dear Anthony. First of all I must ask you to excuse my writing to you in pencil but this is my fourth letter tonight and my pen has run out. Enclosed is your photo. I hope you like it. That is Daddy in it with me.

“Sorry it could not be sooner but we were very busy for Xmas. Thank you for the photograph of yourself – is that your twin with you? He is not very like you. I have one brother, Paddy, and he was in our minor team a few years ago. I have three sisters and a lovely sheepdog named ‘Pal’ and I had a budgie...”

Offaly’s Har Donnelly – “Delighted to get your letter, didn’t know I was that good.” Martin Newell of Galway – “I’m sure you overrate my ability. The best of Galway luck, we always had more than Leitrim!”

Derry’s Phil Stuart wrote three times, including a postcard from Barcelona when he was on holidays. “Nothing to compare to it other than an All-Ireland final!”

Yarn upon yarn, life upon life, all laid out on Tony Daly’s kitchen table in a little book nearly six decades old. It won’t be there for long, though. In the coming weeks, he will hand it over to the GAA who are going to make it an exhibit in the Croke Park museum.

And his brother’s book? Well that’s another story.

“Eamon had one the very same as mine. He wouldn’t have had as many sporting ones. He was big into music so he would have had a lot of music autographs in his. But he had a girlfriend at one time – this would have been in the late 60s in UCD. And the brother of the girlfriend wanted to see the autograph book. He gave her the autograph book to show the brother and he never got it back.

“To this day, he cries about it. He never got it back. It’s lost, gone forever. Oh Eamon, even still – I couldn’t even mention it to him. You can nearly see the tears coming to him. It’s not like him – you wouldn’t be asking Eamon for the loan of an album, even.

“When he never got his back, I took even tighter care of mine. And as the years passed, I wondered what to do with it. So it will be brilliant to have it in the museum. Why would it be sitting here when it could be there?”

Look after it, lads. The 12-year-old boy in all of us insists that you do.