Eamonn Fitzmaurice; ‘His dead ball kicking is second to none, he is the ultimate stylist’ 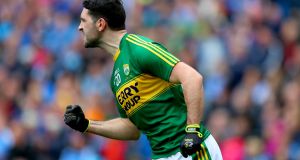 Kerry midfielder Bryan Sheehan has announced his retirement from inter-county football after 13 years with the Kingdom’s senior footballers.

The 31 year-old made only two appearances in this year’s championship, one as a 64th minute replacement in the Munster semi-final win over Clare, and the other as an injury time substitute in the All-Ireland semi-final draw with Mayo.

The St Marys Cahersiveen made his senior debut in 2005, and has a total of 66 championship appearances including seven All-Ireland finals. During that time Sheehan, one of his generation’s finest free takers off the ground, has scored 6-161. He has won Sam Maguire on five occasions, has nine Munster medals, three league titles, and in 2011 he picked up an All Star award.

Remarkably, the attacker turned midfielder first donned the green and gold jersey as a goalkeeper with the Kerry minors, when he was 15.

Sheehan will continue playing with his club and South Kerry. On Sunday he released the following statement; “It has been an absolute honour for me to wear the green and gold jersey for 17 years. It was always a childhood dream to play for Kerry and to do so for so long fills me with great pride.

“I’ve been so lucky to play with some of the best players that the game has ever seen, and will be forever grateful for sharing an unbelievable journey with them. Thank you for all the memories, but more importantly for the friendships.

“I would like to thank all the managers for whom I’ve played under, for the guidance and support shown to me. I would like to thank the county board for their continuous support, all the management teams, doctors, physios and backroom teams for everything they have done to help me. A big thank you to the ever-loyal Kerry supporters for the support you have shown to me throughout my career.

“I would especially like to thank to my club St Mary’s for all the support and help they have given me. Thanks for giving me the opportunity not just to wear the Kerry jersey, but to captain Kerry at minor, Under-21, and senior level. I look forward to continue playing football with St Mary’s and South Kerry.

“Finally, and most importantly, I would like to pay a special thank you to my wife Ita and my family, without whom none of this would have been possible. The unconditional love and support you have given me is what kept me going all these years, through good times and bad. Every time I put on that Kerry jersey I did my best to make you proud. The sacrifices you’ve made in order for me to fulfil my dream have been immense and I will be forever grateful.

“While the decision to retire was difficult to make, I’m excited for what lies ahead. With the arrival of a baby in January I’m looking forward to the beginning of a new chapter in my life.”

Kerry manager Eamonn Fitzmaurice also offered his congratulations; “Bryan has been an outstanding servant for Kerry stretching back to 2004, winning five All Irelands on the way. He has also had remarkable success at club level. His kicking ability has always been his biggest strength. His dead ball kicking is second to none and he is the ultimate stylist. I wish him all the best for the future, both on and off the field.”