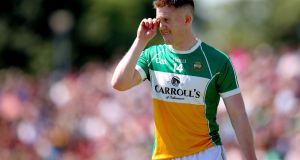 Nigel Dunne had intended on playing both football and hurling for Offaly in 2018. Photograph: Inpho

Nigel Dunne will have a decision to make in the new year after his plans to play football and hurling for Offaly in 2018 have been ruled out by his respective managers.

The 27 year-old, a regular with the footballers for the past three years, has been in pre-season training with both squads with an intention to operate as a dual player next year.

However both football manager Stephen Wallace and hurling boss Kevin Martin have said that come January he will have to choose one.

“Nigel has to call it himself in January,” Martin told The Irish Times. “He’ll have to make a decision. I have tried to facilitate him as much I can, and both of us (Martin and Wallace) would love to have him and would love for him to be able to play both. But in this day and age I don’t think that it’s possible to be a dual player at county level.

“Football is his first love, but he’s never given hurling a proper go and he’s 27 so it’s now or never, that’s the way our conversations have been going. If he chooses football he will be a loss for us because he’s been going well, but I won’t be pressurising him. It’s his decision, and we’ll give him a couple of Walsh Cup matches and he’ll see then how he goes and I think he’ll know himself from that.”

Dunne scored 0-13 in his three starts for the Faithful County last summer, as they exited the qualifiers against Cavan following a defeat to Westmeath in a replay.

“Nigel Dunne cannot play both. I’d love if he could. I’ve zero objections. Of course he wants to, but it’s just not possible. I’m sure Pat Gilroy would love some of the Dublin footballers, or the Kerry hurlers back in the day would’ve loved Paul Galvin to play with them too.

“But the current fixture list for next year from Croke Park is actually clashing, there are four or five weekends where there is national football league and national hurling league.

“He’s been in training with us since day one, and he’s training well. There’s no direct complications with the training schedules, the problem is the matches and he can’t be in to places at once.”

“Is he trying, yes. Is it possible, no,” explains the former Kerry Junior All-Ireland-winning coach. “He’s just going to have to make a decision. I’m not stopping him and I’m not pressuring him but Nigel Dunne has to make a decision. When he tells me he can split himself in two and be in two places at once, but until then he can’t play both. We had a conversation, and he’s been under enough pressure after just getting married and he’ll be away now for a while.

“It’s a horrible decision for a young lad who loves playing with his county and just wants to represent his county in both codes. But in our last conversation he told me that his wife has agreed to change his honeymoon plans so he will be available for the first round of the football league, so take form that what you will.

“He’s given it a go and I know he’s played challenge matches with the hurlers. But I’m sure Kevin feels the same way, it’s just impossible for any young lad from any county to play both. Neither Kevin Martin or Stephen Wallace will let him just row in and out when he likes. He’s in or out so right now he needs to make a decision. Is he hurling or a footballer?

“It’s commendable, he’s got great passion for his county. I’m from a dual club myself in Kerry. It’s part of life here, but at intercounty level nobody is going to say play with us one Sunday and miss the next. It’s impossible - how black and white can you put it. There is a direct clash.

“Until the schedule from the hierarchy evolves to allow for dual players with fixtures on alternate weekends, then it’s just not an option. Nigel Dunne has not come back to me with a solution, so yeah I’ll be expecting a decision.”