Conor Cooney looking forward to getting back to business 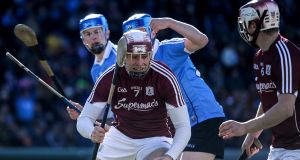 Conor Cooney: “It’s a new year coming and it’ll be a fresh start coming back to square one and every team will be going the whole hog to try and win it.” Photograph: Emily Harney/Inpho

Conor Cooney is looking forward to getting back into a healthy routine in 2018, as Galway’s All-Ireland celebrations begin to wind down in Singapore this week.

Three months after bridging their 29-year wait for Liam MacCarthy, Galway’s celebrations have brought them from Boston to south east Asia for this week’s PwC All Star tour. Later this month they head off to Cancun for their All-Ireland winners’ holiday, after which they’ll be back to collective training and the St Thomas’s clubman can’t wait.

“It’s been fairly hectic since we won,” explained Cooney after Saturday’s All Star match at the Padang where he scored seven goals (Pauric Mahony bagged 10 as the 2017 All Stars comfortably beat the 2016 selection).

“We went to Boston and a few different places. We’re over in Singapore now, it was a long old flight. It takes its toll on the body as well.

“I suppose we’re just readjusting to everything and getting back into the swing of things. It’s going to be good to be back in ways because you can do too much celebrating as well and it takes its toll. It’s good to go back and get back to all the lads again and get into a routine and healthy living at the end of it as well which is a good thing.

“It was fantastic [winning the All-Ireland]. I remember going back to the club there and seeing the cups side by side and it really hit home. You’re looking out at your clubmates and your family and everything and you saw the cups side by side. It was a real moment where things really hit home and you thought, ‘Jeez, we’re after achieving something here’. It was a fantastic night.”

The All-Ireland win meant that Cooney could double up on his club All-Ireland medal – but which meant more?

“The inter-county is crazy, you’re hurling with lads again that you’ve hurled with for years. They’re kind of two different things. If you asked me which was better or which was more emotional, I couldn’t tell you. I couldn’t split them. They were both incredible, two fantastic achievements.”

Even after the success of this year however, and that club triumph in 2013, this year’s All Star full forward is keen to maintain his motivation in 2018.

“That’s a challenge in itself, trying to stay fresh is a big thing. We’ve the League there, we’re starting in the same place we started last year. We didn’t achieve what we set out to do in the league last year which was get promotion to 1A.

The last team to win back to back hurling titles, other than Kilkenny, was Cork in 2005. While the last time Galway claimed the title in 1988, they had also gone back to back.

“Yeah we grew up on stories of what those teams achieved and I suppose they were idols to us and yeah, it’s something you want to emulate, to do a back-to-back. They did it in ’88 so absolutely, it’s something you’d set out to try and achieve. It’s not easy, they’re such fine margins. You’re trying to keep the pressure off in a way and set out and get yourself right and do your training as you would do it anyway and I suppose what happens, happens.

“When we did win there was an overwhelming feeling of relief. We’d been under a lot of pressure for a long time because the Galway public is mad into hurling and I suppose they expect so much every year and we finally achieved the goal we set out to achieve.

“It’s a new year coming and it’ll be a fresh start coming back to square one and every team will be going the whole hog to try and win it so you’ll have to have yourself 100 per cent right and be right for championship.

“We probably wouldn’t have been let back across the Shannon if we lost. So I suppose it puts a lot of demons to rest.”