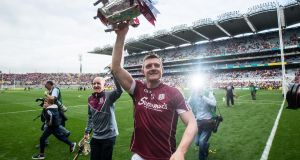 Convention season has always provided a sort of microcosm of how counties come into or out of the red and this year is no exception.

For All-Ireland hurling champions Galway, there is evidence that less sometimes does equal more: their county convention in Loughrea Monday night heard secretary John Hynes report that overall county team expenditure came in at €1,295,639, down €66,454. Final 2017 accounts also show a surplus of €418,000 of income over expenditure.

This is despite Galway enjoying arguably its best ever year – also winning the Allianz Hurling League, Division Two of the Allianz Football League, plus Connacht under-21 and minor football titles.

It also compares impressive against neighbours Mayo, who did ensure a record-equalling 10-match run to their losing All-Ireland final against Dublin, but racked up €1,514,857 in county team’s expenditure, including €1,123,995 on the senior football team alone, an increase of €131,941 on 2016 – although overall team expenditure was in fact down on 2016.

The Galway county board, however, are still servicing an estimated €3.1m debt to Central Council, and Hynes announced plans to sell the land at Mountain South in Athenry in 2018, the purchase of which resulted in the prime source of that debt.

“To avoid an unsustainable increase in our loan repayments in 2018, we plan to sell the property at Mountain South and use the sale proceeds to reduce our debts and repayments,” said Hynes. “The reduction of our capital debt is one of our top priorities and one of the biggest challenges we are facing. (We) will continue to make every effort to improve our financial performance in the forthcoming year in partnership with our clubs, our various sub-committees and the Tribesmen Supporters Club”.

Galway’s overall €418,000 surplus is partly attributed to a pre-All Ireland hurling final fund-raiser, and €317,000 from the Galway Tribesmen Supporters Club, a third more than last year. Two Ed Sheeran concerts in Pearse Stadium next May are expected to further boost commercial income in 2018.

Mayo’s county convention in Westport on Sunday heard outgoing secretary Vincent Neary deliver his final report, before stepping down due to the five-year limit: Dermot Butler from Crossmolina was elected as new secretary, with Ronan Kirrane elected unopposed as assistant secretary.

In his final report, Neary highlighted the need to invest more in facilities in Mayo. Cairde Mhaigheo fundraising raised an impressive €718,449 in 2017.

“We here in Mayo need to be proactive in our approach and in our actions to make sure that this county remains at the top and reach the last eight as often as possible. To do this our structures must be right starting with our academy squads and our coaching in schools and clubs.

“Our facilities for all our adult and underage footballers and hurlers will have to be at a high standard. We simply need more space. We are limited to a pitch and a half to cater for all teams. This is not enough and hopefully in the near future some officer of this Board will be able to stand before you and unveil plans for additional playing and training pitches which I know you would unanimously support.”

Neary also gave his tentative approval to the new Super-8 football format. “Whatever about its faults what it will do is give the club players certainty as to when their championships will take place. Let us give it a chance and as it is for a three year trial period, then if is not to our satisfaction it can be revisited to make it better.

“The intercounty programme is in my opinion, continually squeezing in on club activity and limiting the amount of time that an intercounty player spends at his club. This is unfortunate but it is hard to get the balance right.”