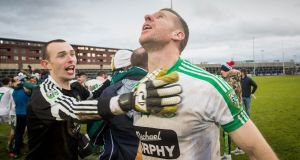 Ronan Sweeney has been around the block a couple of times with club and county but Sunday’s Leinster club triumph was as dramatic a game as he’s been involved in a long and distinguished career.

The Moorefield man came to national prominence as a 20-year-old back in the summer of 2000 when he was part of a Kildare side that overturned Dublin in an unforgettable Leinster final.

Now 37 and in and out of his club team all year, he played a crucial role in helping his side to a stunning provincial final success. They were six points down with five minutes remaining and still five down as the game went into injury time. But they managed to pull it off, scoring 1-4 without reply to claim their second Leinster club title and first since 2006.

And Sweeney was front and centre of it all. He moved between midfield and full-forward throughout the game, getting on a mountain of ball and making his presence felt. His 61st minute goal threw Moorefield a lifeline and in the sixth minute of added-on time he prevented a long-range Eanna Connor free going wide – his powerful fist directing the ball back into the square where Kevin Murnaghan gathered possession, swivelled and popped over the winner.

It was the last action of an incredible game.

“This is the best competition I’ve ever played in,” said Sweeney afterwards as the club’s supporters celebrated joyously on the O’Moore Park pitch, a rousing rendition of the ‘Curragh of Kildare’ still ringing in their ears.

“There’s nothing like the club to get the spirits going. This is incredible.”

The best comeback he’s been part of? “Maybe in 2000 when we beat the Dubs when six down at half time. (But) we had a whole half to do that. This time we were six down with five minutes to go. Incredible really. Can’t put it into words how it feels.”

Incredible it really was. St Loman’s, managed by former Moorefield boss Luke Dempsey, will be haunted by how they let it slip from their grasp. When Ronan O’Toole got in for a brilliant goal in the 54th minute it put them 2-10 to 0-10 up.

But they pressed the self-destruct button in the most emphatic way. First, key forward Ken Casey was black-carded; then Sweeney struck for a goal after inspirational work from centre-back James Murray in the first of five signalled minutes of injury time.

Loman’s midfielder Paul Sharry then picked up a second yellow, Eanna O’Connor pointed twice to bring the sides level and with all the momentum, Moorefield earned a free almost 60 metres out. On a heavy pitch, it wasn’t scoreable. But Loman’s sub Billy O’Loughlin was guilty of flicking the ball back and referee Barry Tiernan opted to bring it up. Just outside the ‘45, O’Connor – son of former Kerry boss Jack, who is part of the Moorefield backroom team – was summoned out to have a go.

His effort, however, was way off target and seemingly heading wide before Sweeney kept it alive and Murnaghan landed the winner.

It was some ending to a fine battle.

The first half was a typical winter scrap – with huge intensity, a crowded midfield and scores hard to come by.

There was nothing between the sides early on and they were level 0-3 each after 18 minutes.

But Moorefield moved up a gear and dominated from there to half-time. O’Connor scored all three of the Kildare side’s opening points (he finished with eight in total) with Sweeney, David Whyte – who did a fine marking job on John Heslin throughout – and James Murray all on target too. At half time, Moorefield led 0-7 to 0-4.

St Loman’s, though, were a completely different side in the second half. Within six minutes they were level after points from Heslin, Casey and O’Toole and a minute later they had the game’s first goal, Offaly native Ken Casey finishing brilliantly after a long ball from Kelvin Reilly wasn’t dealt with by the Moorefield defence.

Centre-back James Murray got a badly needed point for Moorefield but Loman’s had a head of steam up now and Ronan O’Toole and Shane Dempsey pointed to stretch them four clear.

O’Connor and Eddie Heavey did pull points back for Moorefield but the tie seemed to be settled when Ronan O’Toole struck for Loman’s second goal in the 54th minute.

We were far from finished. For St Loman’s a winter of discontent awaits, for Moorefield they’ve an All Ireland semi-final against Corofin of Galway or London’s Fulham Irish to look forward to in February.