Watching Dubs meet challenges of 2018 will be fascinating

Rivals Mayo, Tyrone and Kerry must hunker down again and plan to stem the blue tide 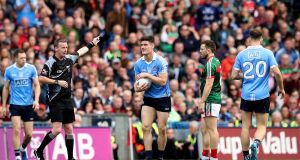 If there was an abiding image of the final it was of Connolly, supposedly the hot-head, getting up from the ground and gesturing to his team-mates to relax, that everything was under control. Photograph: Ryan Byrne/Inpho

Down to the embers, then, of 2017, and globally it may feel like a fractious and anxious and absurdly fast time with the spectre of DJT knocking about in the recesses of the imagination.

But on this small island there is, for anyone who enjoys sport, the small and not insignificant consolation that we are in the midst of a privileged era for Gaelic games and its colour is sky blue: Heffernan blue.

It is the time of year when sporting highlights reels and best-of lists proliferate. And when you think about 2017, it is impossible to avoid the supremacy of the Dublin senior football team and, more specifically, the unbearable drama of their latest All-Ireland final over Mayo.

After this weekend, the GAA goes into the briefest of hibernations before the big carnival kicks off for real in the third week of January in wintry football grounds across the country. And the old association has its gripes, with its top-tier teams hurtling towards unsustainable levels of amateurism, the rest watching that comet streak and the club players feeling increasingly disenfranchised. But the prevailing theme will remain unchanged from the last three seasons: can anyone stop Dublin?

The world of Gaelic football has reached the same point of the Rubik’s Cube that hurling found itself in when the permanence of Brian Cody’s Kilkenny team began to dawn on everyone. There was a time, remember, when the other hurling counties had begun to despair of ever beating the Cats and seethed at their supremacy, their humility and their knack for always, always coming out on top.

The same is now true of Dublin. All the other leading teams and managers have reset their co-ordinates to try and cope with the three-time All-Ireland champions, a feat last achieved by a city team when the land was still smouldering after the War of Independence.

No team had set themselves up to take on Dublin as explicitly as Tyrone did last summer. But the stealth and tidiness with which Dublin destroyed the Ulster men’s highly organised defence engendered a general unease around the country. That game was one of the subjects Diarmuid Connolly spoke about when he sat down for an interview with the Blue Is The Colour podcast.

The chat revealed a side of the St Vincent’s man that clashes with the brooding brilliant athlete of popular portrayal. Over the course of an hour he was engaged and up for fun and fascinating on the evolution of the mindset of the team in the years since they surprised everyone – and most importantly themselves – in winning the 2011 All-Ireland. But that semi-final win against Tyrone was the culmination of three years of hurt dating back to their 2014 semi-final defeat to Donegal.

That loss forced Jim Gavin and Dublin to change their approach to the game and they became a flintier and more considered side and haven’t lost a championship game since. Tyrone’s return as the standard-bearers of Ulster football gave Dublin a first proper chance to pit themselves against a system-based team akin to the one which had run them onto the rocks three years earlier.

“We were baying for it,” Connolly explained. “That was the hurt. And you saw it this year how the guys dismantled it – it was just beautiful to watch. Don’t get sucked in. Most teams might forget the hurt but we didn’t. It is literally three years of hurt. They were touted to be a coming team. We had watched them; they were very, very good.”

Most of the country found that game to be soporific because it ceased to be a contest from the fifth minute when Con O’Callaghan’s rifled home a goal and it was clear from very early on that Dublin had Tyrone at their mercy. It was a humbling and for other leading teams, it was a frightening moment. But it is interesting that such a dynamic and instinctive player as Connolly found the process – the patience and the endless recycling followed by the precision raids for scores – ‘beautiful’ to watch.

Connolly was only just back after serving his long suspension and watched all but the last 60 seconds of the game from the stands. The decision not to introduce him until the 70th minute – and to not start him in the final – was interpreted as an emphasised point made by Gavin and the presumption was that Connolly would have been smarting on All-Ireland final day.

But the vivid appreciation with which he recalls that day convincingly dispels the notion of his disenchantment. When the All-Ireland title was on the line, Connolly effectively won the final for Dublin. Dean Rock exhibited incredible composure to strike the winning kick so cleanly but it was Connolly who had manufactured the free with one of his trade-mark biting runs, panicking Chris Barrett into a hasty tackle and cleverly drawing the free.

If there was an abiding image it was of Connolly, supposedly the hot-head, getting up from the ground and gesturing to his team-mates to relax, that everything was under control. He had belonged to a group that once couldn’t figure for the life of them how to win the big days. Now, losing them never seemed to cross their mind.

Serial winners wear thin on neutrals. Part of the unspoken deal with the Dubs was that they were flashy and vulnerable;: that they could be relied upon to melt against a touch of Ulster hatred or Kerry guile. Now, they are resolutely anti-flash and seemingly invulnerable. The recent report by John Costello, Dublin’s dynamic chairman, was amusingly prickly in its defence of Jim Gavin and revealed a collective sensitivity as to how the city team are represented in the media.

The opinions about Dublin won’t stop; that they are a phenomenal team, that the county should be split, that they have all the advantages etc etc . . . Gavin’s guarded persona when it comes to dealing with media won’t change – nor will the resentment that provokes.

But the accusation that this present team has left its stamp on the GAA record books because of money is unfair. It may be true that Dublin has all the fiscal and population resources to give its teams an unassailable position. But the evidence of that will only become apparent in 10 years time, when the 10-year-olds being coached now in what is a streamlined and thorough coaching blueprint are maturing into senior prospects.

The rise of Connolly and company is down to the club coaching he received two decades ago and to personal ambition and to whatever decision Gavin’s squad made to give themselves up to this thing.

Anyone who thinks that they will be somehow sated by this year – that we will see chinks in the armour when it all kicks off in a few weeks – is kidding themselves. On one level, the Dubs are a machine. But if you take five key starting players – anyone could name them – out of the equation they quickly become just another good football team with flaws. In that sense, the level at which they are operating just now is as precarious as it is reliable.

And once the new training season starts, then the high jinks of podcasting and book-writing will cease and the Dubs will become as serious as Spartans again. They are on most-wanted posters from Tyrone to Kerry and all the usual strongholds in Mayo. They are a national fixation. That’s what makes Dublin the most fascinating sports prospect of 2018. They know in their souls that it’s possible that they can be beaten but their hearts or minds won’t tolerate that for an instant.