Moorefield strike at the death to win Leinster championship 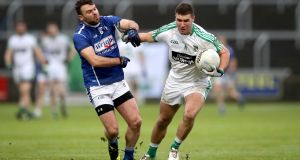 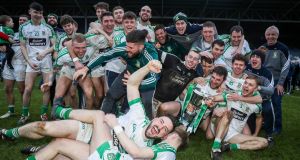 Kildare side Moorefield are the Leinster club football champions following an incredible win over St Loman’s of Mullingar in O’Moore Park on Sunday.

They seemed dead and buried when they trailed by six points with seven minutes remaining – and they were still five down as they game went into injury time.

But a goal from 37-year-old Ronan Sweeney threw them a lifeline in the 61st minute and they kicked three further points, the winner from county player Kevin Murnaghan with the final action of the game. It sealed their second Leinster title and first since 2006.

The winning score was as dramatic as you’ll get. Awarded a long-range free six minutes into injury time, referee Barry Tiernan brought it up following an indiscretion by a Loman’s player.

Eanna O’Connor – son of former Kerry boss Jack, who is part of the Moorefield backroom team – came out to take it. But his effort off the ground looked to be heading wide only for Sweeney to punch it back into play. It found Murnaghan and he duly popped over the winner.

It was some ending to a fine battle.

Eight of the last ten Leinster club football titles have been won by Dublin clubs so a final without a representative from the capital was always going to carry a new level of intrigue.

Ever since Wicklow champions Rathnew stunned St Vincent’s in the opening round, it threw the competition wide open. Moorefield and St Loman’s were among the leading contenders and thrust themselves forward to take advantage of the opportunity.

The first half was a typical winter battle – with huge intensity, a crowded midfield and scores hard to come by.

O’Connor got the scoring underway for Moorefield with a delightful point in the fifth minute. John Heslin responded with an equally impressive effort from just inside the ‘45 but Loman’s star man was well curtailed in the opening half with David Whyte tracking him wherever he went.

Paul Sharry and Ken Casey pointed either side of an O’Connor free to lead 0-3 to 0-2 at the end of the first quarter but Moorefield moved up a gear and dominated from there to half-time.

Another O’Connor free levelled things up and then the long-serving and hugely impressive Ronan Sweeney got in to punch over from close range.

Whyte and O’Connor pointed from play and although Kelvin Reilly responded for Loman’s, a James Murray score meant Moorefield led 0-7 to 0-4 at the break.

But St Loman’s were a completely different side in the second half. Within six minutes they were level and a minute later they had the game’s first goal, Offaly native Ken Casey finishing brilliantly after a long ball from Kelvin Reilly wasn’t dealt with by the Moorefield defence.

Centre-back James Murray got a badly-needed point for Moorefield but Loman’s had a head of steam up now and Ronan O’Toole and Shane Dempsey pointed to stretch them four clear.

O’Connor and Eddie Heavey did pull points back for Moorefield but the tie seemed to be settled when Ronan O’Toole struck for Loman’s second goal in the 53rd minute. It had them 2-10 to 0-10 up.

But Moorefield refused to go away and hit 1-4 without reply to claim a memorable win.

An All Ireland semi-final against Corofin of Galway or London’s Fulham Irish awaits in the New Year.