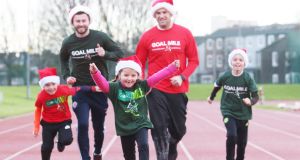 The last thing Jack McCaffrey can be accused of is not enjoying his football. Even when his All-Ireland final came to a screaming halt after 240 seconds, McCaffrey was able to see the lighter side, jump-starting the after-party with his gas, gas, gas.

It helped that Dublin had won, naturally. He’d also got a head start on the celebrations. Still McCaffrey was accused by some as enjoying himself too much. At least for a team that evidently didn’t know the meaning of the word craic.

“It’s funny, I’ve got my fair share of criticism for doing what I did,” says McCaffrey, speaking about his celebratory antics at the Dublin team banquet caught live on RTÉ.

“I may have got a bit carried away. I’d been sitting at that table, as opposed to being outside milling around with fans, because I couldn’t really stand, and availing of what was available there. Look, everyone was on a great buzz.”

Part of McCaffrey’s “buzz” was to numb the pain of the cruciate ligament he had torn in his knee, six minutes into that final showdown with Mayo; only like Dublin chief executive John Costello, who this week gently mocked some of the critics of Dublin football, McCaffrey doesn’t understand why some people still consider the team to be somehow immune to any winning feeling.

“I think it’s quite an Irish thing to give out about people, I’ve found. I’ve been asked this quite a bit, for some reason it’s become an issue this time.

“Some lads on our team are fabulous footballers and just don’t like doing media stuff. For people to be nearly offended, that they won’t change their personality, and want to engage, is wrong. We have lads, like myself probably, and Bernard Brogan and Philly McMahon who are in the media a fair amount, people who enjoy it. And it benefits them or whatever, and they do it.

“But I don’t think it’s fair for someone, just because they’re good at football, to go out into a relatively intimidating environment, to do something that they don’t enjoy doing. I think the Dublin team has been looked at as a whole. Whereas it’s just really a series of individual personalities. That’s my take on it anyway.”

McCaffrey is in cheerful form these days and is speaking at the launch of the 2017 Goal Mile, the traditional Christmas Day fund-raiser which this year is set to take place at 120 venues. He says the operation on his torn cruciate, performed by Ray Moran (otherwise known as Dr Cruciate), has so been entirely successful, although he hasn’t set himself a comeback date.

“It will be in or around the start of the championship,” he says. “And I’m hoping to do the Goal mile anyway in some way, shape or form. The way I’ve been advised to go about it is not to set dates of return to play or anything like that but to set four week goals. I’m in the gym, and started putting weight through the leg the other day for the first time. It’s nice to be proactively doing something as opposed to just waiting for everything to settle down.”

He delayed the operation until October 17th to ensure all the swelling had subsided, although in looking back at the actual incident, he admits it was “incredibly innocuous” – as most torn cruciates often are.

“I was going in a straight line, tried to turn ever so slightly.. . It’s a movement I’ve done thousands of times before and hopefully will do thousands of times again, but the knee just didn’t fancy it that day. It was really bad for about 30 seconds, but by the time the medics came on and I got a drink of water it, had gotten quite a bit better. I think that’s the classic way that cruciate behave.

“It’s an incredibly variable thing. The one thing about it I suppose is when you get the operation, that’s nearly what does the most damage. Pretty much everyone has the same return protocol then.”

He’s since thrown himself back into his medical studies at UCD, the next big challenge coming after his final exams in May, after which he’ll spent a year as a junior doctor – most likely at a hospital outside of Dublin.

“I’ll be making my choices on what I want to do professionally, and football will be second to that. It’s most definitely doable. The biggest challenge would be if I end up in a hospital outside Dublin for a period of time, which I most likely will. It’s four three-month rotations, and unless you get a very high mark, you end up doing nine and three, or even six and six.

“I don’t think it will be a massive issue. I hope it won’t. But that’s the challenge intercounty footballers around the country have, jump into the car straight after work, travelling back to wherever they are training.”

And all the while enjoying it.