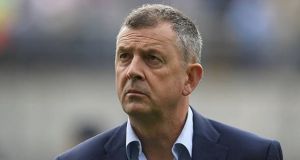 Dublin GAA chief executive John Costello: “The Super 8s are here for a three-year trial period so please give them a chance to sink or swim.” Photograph: Getty Images

Two weeks ago Dublin received the lion’s share of the Government’s almost €56 million in sports capital funding. Across all sporting projects, the county got €12.76 million, Galway was the next most successful with €3.26 million.

Some people viewed that as evidence of further bias towards the county and the capital: in defending that decision Dublin GAA chief executive John Costello suggests otherwise.

“A euro invested by the Government in Dublin is better value due to the large population and the realistic opportunity to increase participation,” says Costello, who will address the matter in his report to next Monday’s county convention. He will also highlighting the fact all counties were given equal opportunity to apply (all valid applicants received some grant aid).

“There are a number of factors which are unique to Dublin clubs and sporting organisations, but let’s look at this from a GAA perspective. I am aware that land cannot be bought from these grants but, as mentioned elsewhere in this report, the cost and [lack of] availability of land is a critical factor in this county, and this has a knock-on impact across the finances and facilities of every single club.

“I would never apologise to anybody for a single cent of grant aid received in this city. Instead, I would congratulate those who have the vision, who plan, who budget and who give of their time to ensure that their club is enhanced or improved – or as is often the case – is assisted in providing the very basic facilities to keep the club going.

“These people are to be lauded – they are doers and achievers. They get out on the pitch and hurl rather than sit on the ditch and carp.”

Elsewhere, Costello makes the suggestion it may be time to trial two referees in senior intercounty matches.

“Have you ever witnessed a more relentless, turbo-charged, utterly exhausting All-Ireland final than this year’s latest battle of inches between Dublin and Mayo? And that was just watching the game, never mind playing it!

“Surely the time is nigh to introduce two referees at intercounty level – both football and hurling? The pressure placed on GAA referees has always been high – too high, perhaps?”

He also believes the new “Super-8” round of the football championship, although untested, should be given a proper and fair trial.

“Based on the doomsday reaction of assorted naysayers to the looming arrival of the ‘Super 8’ format, you’d swear that next summer’s All-Ireland senior football championship is going to be an unmitigated disaster for almost everyone.

“But let’s not rush to judgment. The Super 8s are here for a three-year trial period so please give them a chance to sink or swim. Other voices have offered the hope-belief that they could be the gateway to further reform and a new SFC structure that provides all counties – not just the heavy-hitters – with a tangible prize to aim for.”

1 Maradona’s terrible, terminal journey from human to myth divided him in two
2 Here is your handy guide to sport on television this week
3 Rapid Vienna take the gifts on offer as Dundalk mess up their lines again
4 Feidhlim Kelly: Athletics competition needs a roadmap to recovery and fast
5 Andy Farrell hands Billy Burns first Ireland start against Georgia
Real news has value SUBSCRIBE