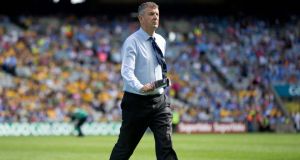 John Costello: “These conceited Dubs might be liked by some but they’ll never be loved; these unpatriotic Dubs they should be forced to surrender the GPO!” Photo: Morgan Treacy/Inpho

It’s not that long since John Costello was defending Dublin’s lack of success on the All-Ireland football stage. Seven years to be exact, Costello trying to make sense of what was Dublin’s then 15th year without a title, beaten by one point in the semi-final by eventual champions Cork.

“Great year or huge opportunity let slip?” Costello wrote in his 2010 annual report. “That’s the cold analysis of the year for our senior footballers. Truth be told, it was partly both.”

It’s with some gentle irony then that Costello now finds himself defending Dublin’s fifth title since 2011, and first three-in-a-row All-Irelands in 93 years – and with some gentle mockery too. The tables turned, Costello doesn’t hold back.

In his 2017 report to next Monday’s convention, in this his 24th year in full-time GAA administration, Costello describes some of the criticism of Dublin’s success as “puerile” – as well as being “both repetitive and often, quite frankly, misinformed”. He doesn’t name-check any of those critics because they know who they are.

The Dublin chief executive begins: “A quick spin through this type of ‘commentary’ post this year’s decider against Mayo goes something like this – full-time whistle sounds; Stephen Cluxton lifts Sam; split Dublin in two, actually make that four; these conceited Dubs might be liked by some but they’ll never be loved; these unpatriotic Dubs they should be forced to surrender the GPO!

“Some of the ‘rhetoric’ was in fact so puerile it was like a collaboration between Roger Hargreaves, the author of the Mr Men series of books, and the writers of that timeless classic, The Magic Roundabout!

“There used by a perennial column written in some publication about the dangers of the ‘Cult of the Manager’ maybe some commentators should examine the ‘Cult of Me’ which seems very much in vogue with some of them. For example have a go at the Dubs, then sit back, get invited as a paid guest onto various radio shows etc – kerching, cha-ching, cha-ching, kerching!

“We’ve been down this road before with regard to the splitting of Dublin and I don’t wish to copy and paste old convention reports here. Suffice to say that sense of place and identity is one of the core principles of Gaelic games. Dublin is a united county.

“However, this theme was given a fresh lick of paint this summer when it was implied that Dublin GAA was ‘short-changing’ young players in the capital and that it would be in the greater good if Dublin were split, for their own sake, if you wish. I presume that was an attempt at engineering dissent and not really a genuine, heartfelt plea for the ‘boys on the Hill’ to be thrown a Dublin jersey?

Costello continues: “Our senior football manager, Jim Gavin, was the target on several occasions during the summer of plenty of hostility – one paper declaring mid-summer that Jim ‘was losing it’ and that it was time for Jim to be moved on as ‘Dublin now need a true leader’. Jim’s ‘crime’ was standing up for one of his players, Diarmuid Connolly (who knows he crossed the line against Carlow) in the face so much rage and counter-rage.

“Then, after the All-Ireland final, Jim was again held up to much ridicule and inaccurate reporting. The atmospheres in the rivals’ dressing rooms after an All-Ireland final could not be any more polar. One utter delirium, the other utter dejection.

“In response to ‘Mr Flip-Flop’, neither his real name nor a real Mr Men character, obviously these Dublin players will never be loved the length and breadth of the country, but they are liked, admired and respected by plenty outside the county. In fact, in terms of within the county, I don’t think, in my lifetime association with Dublin, that I have ever witnessed as strong a connection between our supporters and the current team and vice versa.”

Costello also addresses what he describes as “myths” some of the so-called advantages that Dublin are perceived to have over other counties: “Myth 1: Our senior teams have meals delivered to their homes on a daily basis or ever in fact. Untrue. Myth 2: Our senior teams are given five-star, ‘all-expenses paid’ treatment. Untrue.”

He adds: “Broadening out the debate, as I have often said the battle for young hearts and minds is ongoing and tougher than ever. My belief is that it is tougher in Dublin than in any other county in Ireland. In rural areas, the local GAA club is often the very heartbeat of the parish. Playing underage for the local club is often a rite of passage for young people. This is less so in the larger suburban areas of Dublin.

“But we are not in a situation where we are turning thousands of children away from the gates of our clubs every day.

“Other sports in the capital are well established, well organised and often directly in competition with our games. Add in the many other non-sporting distractions of a large city and you have a real challenge to attract young players. It may surprise some but the penetration of the GAA in certain areas of Dublin remains relatively low. This too remains an ever present challenge.”