Referees ‘had a problem’ with experimental hand-pass rule 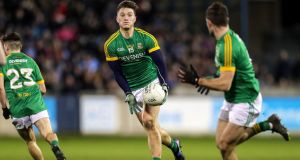 As close as the vote was – 23 for, 25 against, after a debate of about 90 minutes – it appears that referees, and not inter-county managers, had the most significant influence in Central Council’s decision on Saturday to abandon the experimental rule restricting footballers to three successive hand passes.

Several prominent managers had spoken out against the rule, most notably in Ulster.

But in assessing the outcome of the debate and the vote, GAA president John Horan pointed towards the concerns raised by referees. The opinion of managers, he said, “wouldn’t have carried a whole lot of weight”.

The other four experimental rules were accepted for continued trial: Sideline balls must be kicked forwards, except when in or on the opposition 20m line; an attacking mark may be taken inside the opposition 45, provided it is kicked in play from within the opposition 45 and travels at least 20m; a black-card infraction to be punished by 10 minutes in a sin bin rather than automatic substitution by a replacement; kick-out to be taken from the 20m line and must travel to the 45m mark.

“They [the referees] had a problem,” said Horan.

“At a time when we are talking about two referees and then we add this, I think it was an influential factor. If you looked at the overall debate, there is a broad range, stats were out there in the public domain to the members, the information from the committee was out there and the information from referees.

“We put it all out there and we were as open about the debate as we could be. I would say, in a funny kind of a way, managers, no.... people spoke about what they saw themselves, from their own evidence. And then individuals who had attended matches actually offered their own personal experiences to the debate, and you can see by the result it was tight.

“Those that were for retaining it, a lot of those individuals were of the view that maybe the trial period wasn’t long enough. And that was a major part of their argument, more so than they said it necessarily was having a big impact or a change.

“Some people argued that the statistics were there, that there was more kicking in the game, but then people talked about the quality of the kicking and was it really just kicking substituting hand-passing going across the pitch or going backwards.”

That trial period resulted in a review by analysing 10 matches from the pre-season schedules, carried out by sports performance analyst Rob Carroll, whose research had underpinned the proposals advanced by the Standing Committee on the Playing Rules, chaired by Derry academic David Hassan. Ultimately, suggested Horan, people had seen enough already.

“People felt that whilst it was statistically reducing the hand-passes in the count, it wasn’t actually doing what people were hoping it would do – and that was break the actual blanket defence. Other stats that were put on the table were while goals remained similar in the numbers scored, it seemed like points had actually dropped off.”

It will be another five years before playing rules can be trialled in a similar method, although rule changes can still be put forward to Congress for approval, without experimentation.

“I don’t think we’re a mad, revolutionary organisation, and I don’t know if we relaxed that marginally, that it might just help. It’s probably the most focussed we’ve been in terms of the debate. People, instead of just giving out about it, are actually coming up with options.

“One clear option that came up, in the interim, was that maybe a back pass to the goalkeeper could be taken on board [ruled out]). Unfortunately it came out of the debate but hit it just that little bit late, and after the proposals were made. The view being there that if you took the back pass out, to the goalkeeper, you’re taking that overlap for short play out of it.”

Implementing the sin bin across all grades, said Horan, may take some time and patience.

“I’m quite sure there are going to be teething problems with them all, in terms of evolution of the sin bin that’s something that will get sorted out in the long term. Referees will just have to note it in his book on a digital watch or something the time the player goes off and when he is due back on.”