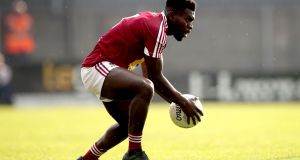 Boidu Sayeh: has been in good form in Westmeath’s defence. Photograph: Ryan Byrne/Inpho

The first of the weekend’s pre-season finals to be decided takes place in Parnell Park on Friday evening.

It is Westmeath’s second successive final after losing last year to Meath and this time around, presents a tempting prospect for Jack Cooney’s side, who have played well so far.

Opportunity knocks in the sense that Dublin will be fielding their customary development 15 under the gaze of senior selector Paul Clarke.

It has become a feature of January in recent years that Dublin give up-and-coming players an audition during the competition with plenty of encouragement that speaking parts may be available when the season takes off.

It is part of the fast-growing legend of this approach that two such hopefuls, Niall Scully and Brian Howard, were in each of the past two years elevated to All-Ireland final participation and in Howard’s case in 2018, an All Star and Young Footballer of the Year short listing.

As the county received a bye to this year’s semi-final the talent spotting hasn’t been as easily achieved but the process is taken so seriously that last year one of the players on the fringe of the first team opted not to go on the team holiday but instead, to press his credentials in the O’Byrne Cup.

Westmeath aren’t sticking rigidly to their established first team either but will undoubtedly be more recognisable than the aspiring Dubs.

It’s a fast-rotating business with just three of last year’s players involved again but as one of those involved points out, there are always those who aren’t available from year to year because of injury, academic commitments or travel.

That is borne out by the fact that eight of the 2017 group, which raised eyebrows when winning the trophy that year, are again involved.

The approach has been to take on board those who show well in the county championship as well as those with underage pedigree. It’s a system that also give chances to late developers – for instance, Ryan Basquel, older brother of Colm, was top scorer in the semi-final win over holders Meath.

Westmeath though have been a strong presence in the province, deservedly reaching a couple of Leinster finals in recent years and the form of a number of players, from Boidu Sayeh and Ronan Wallace at the back to Callum McCormack and Ger Egan in attack has been good.

This is an opportunity they can take.