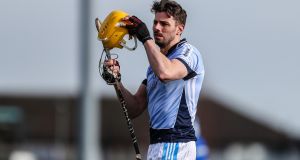 David Breen: the former Na Piarsaigh and Limerick star worked with the Leinster academy up until the summer of 2016 when he was appointed to his current role with Wasps. Photograph: Laszlo Geczo/Inpho

It’s not really where David Breen might have imagined himself.

Growing up and throughout his playing career he was focused on hurling and to good effect.

A Munster medallist with Limerick in 2013, having captained the county the year before, he retired from intercounty two years later before going on to win an All-Ireland with his club Na Piarsaigh in 2016, when they became the first side from the county to win that title.

On Sunday, however, he will be deep in rugby country, as first-team physiotherapist with Wasps who will be trying to complicate Leinster’s passage into the quarter-finals of the European Champions Cup.

That is now his life. After Na Piarsaigh’s defeat in last March’s All-Ireland final replay by Cuala, he hung up his hurl and confined himself to commuting as a spectator.

“All those nights under floodlights in the wind and rain,” he says.

“It’s definitely a different feeling when you turn up after flying home to watch them in a county semi-final or final. It’s a bit abject, you know, when you haven’t gone through the journey with the team.”

What does he see as the main differences between his elite career in hurling and that of the players he helps to maintain in Coventry?

“Professional sport is really black and white. The nature of the Premiership is that you play week in and week out. It’s different to the GAA, which is almost like boxing in a way where you go into camp and you prepare for weeks on end for that one game.

“I know the system has changed back home but historically it was that camp-like mentality, waiting five weeks for a game that could determine the way the rest of your season goes.

“ At club level it’s still a bit that way. You’ve got these big gaps in the summer and then, you might play two rounds of championship and then you’ve got more long gaps.”

The weekend’s visitors are no strangers to Breen. He worked with the Leinster academy up until the summer of 2016 when he was appointed to his current role with Wasps. That period brought him into contact with many of the young players making waves in Irish rugby and he shared a house with Ireland tight head prop Tadhg Furlong.

“I had the benefit of working with Leinster and they have a pretty rich pool of talent with a very high conversion rate. If players don’t get a contract they’ll be snapped up by the other provinces and if not there’s a good pathway over to England. It’s really good to see those guys realise their potential on the big stage.

The difference between preparations for a professional rugby team and even the highest-level county panels in the GAA is obvious when you take into account the ability to rest and focus on training to the exclusion of everything else.

“The level of detail you can go into with a full-time professional, who turns up and that is his job. He’s turning up to work every morning and has three or four training days a week and a captain’s run. There’s all this contact time with rugby coaches, medical team, strength and conditioning coaches, video analysts – all trying to develop the athlete and establish a clear pathway.”

There is, he believes, an upside for Gaelic athletes notwithstanding the disadvantages of not being full-time. The sense of identity and belonging within a community is hard to replicate.

“On the plus side of it [from the GAA’s point of view], particularly over here where you’ve got 12 professional teams and the players are more a commodity and maybe see themselves as such as well and they have the freedom, the choice to go to the highest bidder and to swap different clubs, which isn’t an option in the GAA.

“This is something the GAA benefits massively from because you can foster an identity and a culture within your team. The motivations of county players at the elite level can be different to those of professional players.

“Over here it’s different, more of a business model. The clubs have a lot of power and are under a lot of pressure to produce results and more instantaneously than with long-term visions and plans. As a result the academy system suffers compared to back home.

“ the quick alternative of buying in talent rather than nurturing it over three or four years feels like the best option.”

Last September he was on hand for Limerick’s Holy Grail, a first All-Ireland in 45 years.

Breen saw encouraging signs in the team, as they gained a long sought-after promotion from Division 1B in the spring, and he was optimistic that manager John Kiely, who was a selector in 2013, was on to something.

“I was more confident in the coaching set-up and management because the previous year they had got to grips with the player group and had the group they wanted playing the way they wanted. I definitely felt you could see the improvement and that was down to good coaching and management.

“It was brilliant, to be honest.” He laughs. “Just great.”