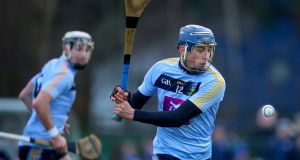 Paul Crummey scores a goal for UCD in the Fitzgibbon Cup games against NUI Galway at Belfield. Photograph: Oisín Keniry/Inpho

UCD and NUI Galway had to content themselves with a share of the spoils as they drew 3-12 to 1-18 in their opening Fitzgibbon Cup Group A encounter at David Billings Park in UCD on Sunday afternoon.

The visitors looked to have done enough to clinch a precious victory as they enjoyed a two-point lead entering injury time, but two late frees from Ronan Hayes rescued a point for the hosts.

There was very little to separate the sides throughout the 60 minutes with NUIG landing the first body-blow through a smartly-taken goal from Conor Sheedy in the ninth minute.

UCD replied through a goal from Paul Crummey four minutes later and they edged in front as the half progressed thanks to points from Hayes, Seán Carey and Crummey.

The accuracy of Evan Niland was pivotal throughout for NUIG and despite conceding a second goal to Eoghan Callaghan in the 27th minute, Niland’s seven first-half points ensured a narrow 1-11 to 2-6 interval lead for the visitors.

The hosts resumed on the front foot and they raced three points clear by the 40th minute thanks largely to a fine solo goal by Carey.

However, their momentum stalled from that point and with Niland finishing the contest with 12 points, it was the hosts that were most relieved by the final whistle.

The remaining match in the so-called ‘Group of Death’ saw UCC impress in defeating holders University of Limerick by 0-26 to 0-20 with Kerry’s Shane Conway scoring five points from play for the visitors.

Elsewhere, there was away wins for both Trinity College and Dublin City University as they opened up their campaigns with narrow victories.

Last year’s beaten finalists DCU did just enough to register a 0-16 to 0-14 away win against Waterford Institute of Technology while Mark Corry’s goal proved decisive as Trinity edged Garda by 1-15 to 0-13 in Borrisoleigh.

The visitors struggled to make an impression initially as they trailed by 0-10 to 0-5 but the free-taking of Fionn Ó Riain Broin saw Trinity overtake their opponents as they recorded their first ever win at this level.

The remaining contest in Group B was similarly tight as Limerick IT pipped Carlow IT by 1-14 to 1-13 with the late throw-in of the afternoon at Grangegorman going the way of Mary Immaculate College, who pulled away in the closing stages to defeat Dublin Institute of Technology by 1-19 to 1-14.